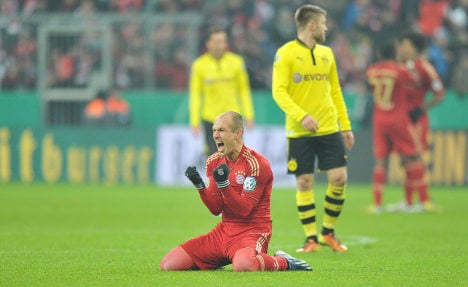 Wednesday’s cup clash was a repeat of last year’s final – when Dortmund romped to a 5-2 win in Berlin – but Arjen Robben’s thunderbolt strike two minutes from the break broke Bayern’s six-match winless streak against Borussia.

This was the clash of Germany’s titans – Bayern Munich, 17 points clear in the Bundesliga against defending league champions and cup holders Dortmund, who have dominated the top tier of German football for the last two years.

February 2010 had been the occasion of Bayern’s previous league or cup win over Dortmund, but Robben’s rocket was enough to put Munich in the last four in front of 71,000 at Munich’s Allianz Arena.

“We have proved with this result that we are the strongest team in Germany,” boasted Hoeneß after the final whistle.

“We thoroughly deserved to beat Dortmund. You can’t get better than the way we played in the last 20 minutes. What we’ve done has put us back to the top in Germany.”

A pre-season Supercup final win in Munich last August had been Bayern’s only source of comfort against Borussia recently and Munich’s senior figures will relish the Allianz Arena win.

With France wing Franck Ribery suspended, Robben took over on the left wing and seized his chance to show coach Jupp Heynckes what he has been missing after the World Cup finalist has made just four starts in the league all season.

The 29-year-old ex-Chelsea and Real Madrid star sank to his knees and beat the turf in delight at the final whistle.

“It’s nothing to do with the past, it’s all about now,” beamed Robben when asked if his goal was redemption for previous weeks on the bench. “It was a top game between not only two of the best teams in Germany, but in Europe and I think I’m allowed to be happy.”

Robben’s inclusion for the suspended Ribery was the only change from the team which won 3-1 at Arsenal in the Champions League just over a week ago and Heynckes said his side had simply wanted to win more.

“We were a touch more aggressive and really wanted the win,” said Heynckes. “It was an intense game between two high-class teams. I can’t speak for Arjen, but a goal helps a player’s confidence after a long time out with injury and time on the bench.”

In a tight, nervy cup game, both teams had their opportunities.

Bayern built up the first-half pressure and when Dortmund’s Marcel Schmelzer hit a weak clearance, Robben’s shot from 18 metres clocked 115km/h (70mph) as it hit the top-right corner on 43 minutes for the winner.

“I have had more fun here in the past, admitted Dortmund coach Jürgen Klopp. “Bayern created the goal and they were clearly better in the first half. We deserved to lose that game. You could see that in good patches, we played well, but we needed to be smarter.

“We delivered an above average performance in the first half, but that wasn’t enough. You have to be strong over 90 minutes to beat Bayern.”

With Dortmund out, Bayern are now clear cup favourites and are on course to be the first team to win the treble of German league, cup and Champions League titles in their quest to end their three-year wait for silverware.

VfB Stuttgart, who beat third-division VfL Bochum 2-0, Wolfsburg and Freiburg are the other teams to go into the pot for Sunday’s draw with the semi-finals to be held on April 16/17, with the final on June 1 in Berlin.