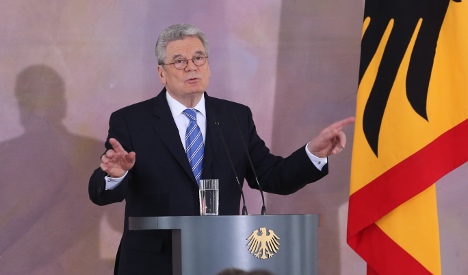 Joachim Gauck delivered an impassioned speech on Europe, his first since taking over the largely ceremonial German presidency 11 months ago, lamenting that its economic crisis had also hit confidence in its “political project.”

Too many Europeans are left feeling without power and influence, he said adding he was concerned that Germany’s role in Europe currently unleashed “scepticism and mistrust” in some countries.

As Europe has sought to overcome its financial crisis, Chancellor Angela Merkel, at the helm of Europe’s biggest economy, has in particular been derided by protesters in struggling southern European nations angry over cuts and painful reforms.

“More Europe doesn’t mean in Germany, a German Europe. More Europe for us means, a European Germany,” Gauck said in his 50-minute pro-Europe address to the around 200 guests at the presidential palace Bellevue in Berlin.

“We don’t want to browbeat others, or press our concepts on them. We stand however by our experiences and would like to convey them,” he added recalling that less than a decade earlier Germany had been the “sick man of Europe.”

Turning to Britain where Prime Minister David Cameron has said he wants to renegotiate country’s relationship with the EU and put the new terms to an in-out referendum by the end of 2017, Gauck said: “Dear English, Scots, Welsh, Northern Irish and new British citizens.

“We would like to keep you! We need your experiences as the country with the oldest parliamentary democracy, we need your traditions, your soberness and your courage,” Gauck said.

“You helped with your deployment in World War II to save our Europe – it is also your Europe,” he said to applause.

And Gauck, an activist pastor who hails from the former communist East Germany, outlined what Germany owed to Europe and the western Allies in getting back on its feet after 1945.

“We were spared at the time what could have easily followed after our hubris, an existence as an outcast stranger outside of the community of nations,” he said.