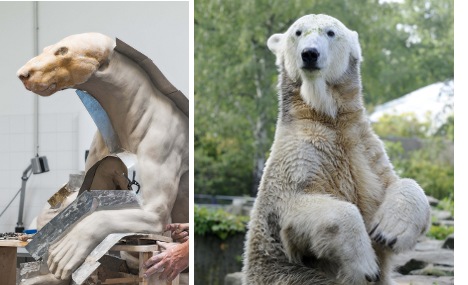 The German capital’s star animal attraction tragically died at the age of four in March 2011 after he drowned following a seizure in his enclosure at the Berlin Zoo.

But the bear that captured the hearts of millions after he was raised by hand as tiny cub remains immensely popular in Germany, encouraging the museum to create a full-sized Knut model covered in his own pelt.

The new Knut will only be shown for four weeks starting this Saturday.

“We are creating an extra entrance into the museum solely for Knut visitors,” Steiner said.

The sculpture will then disappear into the museum’s archives until 2014, when it will be wheeled out for an exhibition on climate change and protecting the environment.

But Knut’s fans creeped out by seeing him skinned can instead head to the Berlin Zoo, which unveiled a cute bronze memorial to him in October 2012.