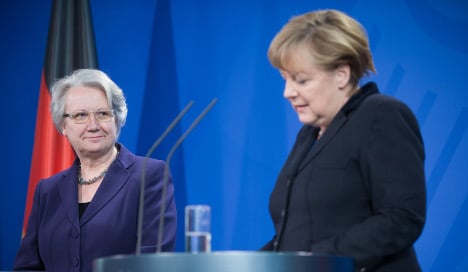 Merkel said she had accepted the resignation of Annette Schavan “with a heavy heart” after her former university stripped her of her doctorate, saying she had plagiarised parts of her thesis “Person and Conscience” 33 years ago.

Schavan reiterated her vow to fight the allegations but said she did not want the claims to damage the office, her Christian Democratic Union party, or the federal government.

“I think today is the right day to leave my ministerial post and to concentrate on my duties as a member of parliament,” said a visibly moved Schavan.

“My decision stems from the same responsibility with which I have tried to carry out my office,” she added.

“First my country, then my party and then me personally.”

Merkel said she had proposed to the president that Johanna Wanka, a minister in the state of Lower Saxony, should succeed her.

Schavan, 57, became the second Merkel ally to step down over plagiarism charges after Karl-Theodor zu Guttenberg, a popular defence minister once tipped as a future chancellor, resigned in 2011.

The extent of Schavan’s alleged plagiarism is thought to be less than that of Guttenberg’s, whose actions earned the aristocrat the nicknames “Baron cut-and-paste” and “zu Googleberg.”

Nevertheless, Schavan’s mistakes were seen as indefensible given her position as education minister in a country where academic titles are taken extremely seriously.

There was also an element of schadenfreude, given her reaction to zu Guttenberg’s downfall, when she said she was “ashamed” of her former cabinet colleague.

“As someone who was herself awarded a doctorate 31 years ago and who has supervised several doctoral candidates, I am ashamed and not just behind closed doors,” she told the Süddeutsche Zeitung at the time.