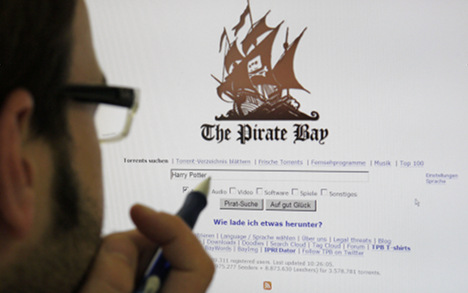 On Friday, audiences will get a long-awaited, behind-the-scenes look at how a handful of internet pioneers found themselves in a David-versus-Goliath battle against big media companies over access to information and creative content in the digital age.

“TPB AFK: The Pirate Bay: Away From Keyboard” was culled from more than 200 hours of footage shot over four years and comes thanks to Swedish documentary filmmaker Simon Klose. He followed the band of net activists in a “whack-a-mole, cat-and-mouse” battle against forces wanting to shut it down.

While the main courtroom drama ended nearly four years ago with founders Peter Sunde, Gottfried Svartholm Warg, Fredrik Neij, and Carl Lundström being fined and sentenced to a year prison – the story of The Pirate Bay and the young Swedes who helped make it the world’s dominant file-sharing site continues to unfold.

Klose told The Local that he was humbled at being invited to premier the film at the Berlin International Film festival, he added that he felt it important to release the film online under a Creative Commons licence, which allows viewers to watch and copy the film for free.

“Putting it out online is sort my way of hacking the film industry,” he said with a laugh before adding that he hoped allowing unfettered access to his film would help it reach a wider audience, something that every filmmaker wants.”I hope it’s viewed by a gazillion people,” he joked.

Quick to admit he sympathizes with the views of The Pirate Bay founders that unrestricted access to culture would boost creativity and that current copyright laws were out of place in the age of the internet, Klose bristles at claims that his film is simply “propaganda” for the file-sharing site.

“I wanted to document what I believe was an historical moment in the evolution of the internet pitting these net rebels against these media industry giants,” he explained. It was, he said, a tragic story about the drivers of new technology being treated like criminals.

Born in Lund in southern Sweden and educated in Stockholm, Klose has been making films for more than a decade, including many documentary shorts and music videos.

Take a walk down the Berlinale red carpet here

In 2008, he connecting with a band of rebellious Swedish net activists, spawning one his most comprehensive efforts to date via a chance phone call with a friend, who invited him to attend a rally against a controversial Swedish wiretapping law.

“It was a scary law. I thought it was really wrong,” said Klose, describing what was known as the “FRA law” and which allowed the Swedish Radio Defence Establishment (Försvarets radioanstalt, FRA) to monitor all telephone and internet traffic that crosses Sweden’s borders.

“So later I had coffee with Peter Sunde in Malmö and I found his stories instantly fascinating. I couldn’t sleep after the meeting so later I called him up and asked if anyone was doing a documentary.”

One of Klose’s first encounters with The Pirate Bay crew and their band of merry followers came aboard a vintage 1970s bus as it travelled to Italy for an “away from keyboard – AFK” meet-up of like-minded netizens.

“I think it was the first time all of these people who had come to know each other online actually planned to meet,” he said. “I found it fascinating that they had become such good friends through the internet, but had never met in person.”

Shortly thereafter, the founders of The Pirate Bay found themselves in a Stockholm court, facing charges they violated Sweden’s copyright laws in an infamous trial which serves as one of the central storylines in the film. “At its heart, this is a human drama and I try to take viewers behind the scenes,” said Klose.

“I hate movies that try to be objective. I tried to be as subjective as possible. The truth in the film is my truth and nobody else’s truth,” he said.

Shooting the film was an exhilarating, if not time-consuming, experience, he says, especially when he was granted access to the then secret location of The Pirate Bay server halls.

“It felt like I was in a real-life cyber-thriller,” Klose explained. “As someone who grew up on a steady diet of sci-fi in the 1980s, I was so stoked to discover that the treasure of these modern-day pirates, their servers, was actually hidden in a real cave.”

Klose seemed circumspect about the significance of the verdict and its effects on the ongoing debate about internet freedom. “It’s hard to say who the winners and losers are. The founders were convicted, but at the same time The Pirate Bay is still going,” he says.

“But the story demonstrates a real power shift. The largest media companies and governments in the world weren’t able to touch this small group of young people and their website.”

Klose also had no illusions about approaching a traditional film studio for help producing and distributing the film. “Releasing this film through a studio was never an option. From the start, I knew it was going to be free,” he says, adding that “the map is still being drawn” on new ways of distributing films.

“We can’t keep building Berlin Walls. We have to ready to accept new distribution systems that make it easier to reach audiences, keep prices lower for consumers, and allow artists to keep a larger percentage of the earnings.”