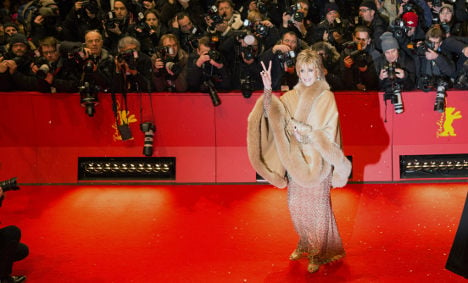 Wong, who also leads the Berlinale’s jury this year, is using the event as a launch pad for the worldwide release of “The Grandmaster”, which opened in China last month to rave reviews and a box office bonanza.

The picture, which was warmly applauded at a press preview, spans several decades of Chinese history to tell the story of legendary martial artist Yip Man, who went on to train Lee, and features mesmerising battle scenes.

Take a walk down the red carpet here

Wong, 54, told reporters he was confident the movie, which is screening out of competition at the 11-day Berlinale, had appeal beyond China, the world’s second biggest cinema market after the United States.

“There is something in this film which is universal. It’s about family values and the code of honour,” he said. “If they are curious enough… it is also a step for (the international audience) to learn more, to explore.”

The film follows the Grandmaster through some of China’s most tumultuous recent history including the Japanese invasion in the 1930s.

It spent around a decade in gestation, with extensive re-shooting and injured actors.

Leung said he started learning kung fu at the age of 46, practised for four years for the film and broke his arm twice doing some of his own stunts. But he said the biggest challenge was capturing the Grandmaster’s state of mind.

“After four years of hard training I understand kung fu is not just physical training or fighting techniques,” he said.

“There is a spiritual side of kung fu and that side you cannot be learning from books or by fact-finding. It grows spontaneously with the mind free of emotions and desires. That is why I had to practise four years.”

Zhang plays the sole inheritor of the “64 Hands” technique of her father, another martial arts master, and uses them to lethal effect in the tale of betrayal and vengeance.

She said she accepted the gruelling training and filming schedule to work with Wong, who shot for 20 months over three years.

“If Wong Kar Wai asked me again to give this amount of time, I would do it again, that’s how great he is,” she said.

Reviews in the international trade press on Thursday were glowing.

“The film contains some of the most dazzling fights ever seen on screen,” the Hollywood Reporter wrote.

It added: “Wong’s art-house fan-base also will find much to savour, with the kind of longing that defines the filmmaker’s oeuvre,” in films such as “In the Mood for Love” and “My Blueberry Nights” with Jude Law.

But German critics were decidedly less impressed by the flick, with one telling Berlin broadcaster RBB he lost interest by the end.

Wong, who made his international breakthrough in 1994 with “Chungking Express”, later joined his stars on the red carpet in his trademark sunglasses for a gala screening at the festival’s Berlinale Palast main cinema.

He is leading the panel handing out the Golden and Silver Bear top prizes among 19 contenders on February 16.

Wong told a press conference with his jury that the Berlinale was an “intimate” festival where the “true pleasure” of sharing ideas was cherished.

“We are here to serve the films, we’re not here to judge films, we are here to appreciate films, to champion the films that we really find inspiring… and move us,” he said.

The first major European film festival of the year and traditionally its most politically minded, the Berlinale this year is showcasing pictures about the human impact of the West’s economic crisis, two decades of upheaval in eastern Europe as well as fresh releases from US independent directors.