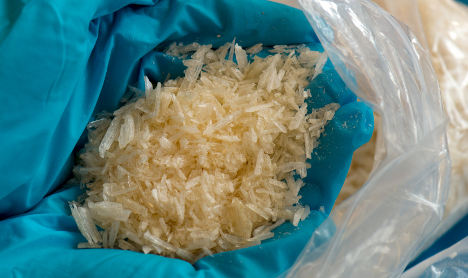 Experience in the United States shows not only how addictive the drug is, but how much damage it can do to people – both mentally and physically, the paper said.

“Crystal is in Germany on the rise and is expanding from the southern states to the north and west,” Tom Bernhardt, a spokesman for the State Police in Saxony told the paper.

Some 40 kilos of the drug were confiscated in 2011, according to the Federal Criminal Office. The traffic is especially bad in Szony – there the number of meth users rose by 45 percent between 2011 and 2010 and increased by as much as 70 percent in some areas.

National statistics for 2012 are not yet available, but the trend is clear, the paper wrote.

“The discovered amounts and the cases involving crystal have shown a significant increase for 2012,” a spokeswoman for the Federal Criminal Office said.

The paper reported that the first numbers available for 2012 are showing a horrifying trend. In Bavaria the number of first time consumers, as documented by the police, of crystal and other hard drugs rose from 24 in 2009 to 456 in 2012.

But the paper noted that the high figures reflect a greater scrutiny of the drug – and when enforcement efforts are stepped up the numbers can be expected to increase.

The effects of crystal meth are similar to cocaine. It makes people euphoric, increases their confidence and sex drive and reduces hunger and thirst. People can stay up for long periods of time – 36 hours or more – and then they crash when the drug’s effect goes away, followed by insomnia, anxiety and depression.

Horror pictures of meth addicts with eroded teeth and severe pock marks on their face have been published in the United States for years.

For Dr Härtel­ Petri that just shows how bad the American healthcare system is. “In Germany you can hardly find such pictures. Whoever has bad teeth goes to the dentist and gets them fixed. Crystal addicts are visually hard to recognize in Germany,” he said.

Crystal is a synthetic drug that is crushed and snorted. It was given to soldiers in World War II and known as “tank chocolate” or “Hitler Speed” as a way to eliminate their fears. But the doses were much lower back then than what addicts take today, Petri said.

Tennis star Andre Agassi, who is married to German tennis star Steffi Graf, admitted to using the drug until 1997.