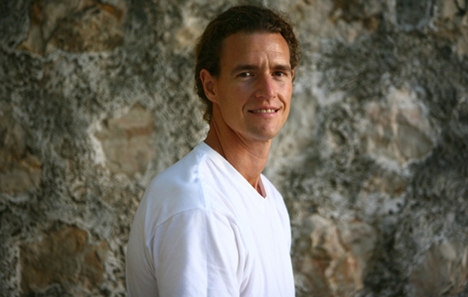 Tom Franz, 39, is from a town near Cologne but has lived in Israel for nearly a decade having fallen in love with the country as a schoolboy. Now, he’s a minor celebrity and finds himself posing for photos and signing autographs in Tel Aviv several times a day.

At 1.95 metres tall and ash blonde, he stands out. But Franz both speaks fluent Hebrew and has converted to Judaism. “It was really hard,” he said, before explaining that the government authorities did not make the two-and-a-half-year process easy.

Despite his obvious knack for cooking, Franz never professionally trained in the kitchen. He studied law before moving to Israel. “I always cooked for friends,” he said, adding that it was his wife who gave him the push to make more of his talent, by nudging him to apply for the competition.

“She cried with excitement when she tried my cooking,” he added.

Converting from Catholicism to Judaism meant a lot of changes, especially in the kitchen. Franz now cooks kosher, and will be doing so in the final Masterchef cook-off on Tuesday.

And although he said switching to a Jewish lifestyle had meant having a much healthier lifestyle, a trip to the German island of Sylt made him realise how much he missed crabs – shellfish is not kosher.

Of course Franz has not divulged what he plans to cook on Tuesday but during one of the earlier rounds his trout and potatoes blew the judges away.

Through cooking, it seems that Franz is in his own small way, helping to cultivate German-Israeli relations. “Suddenly something German is good and considering the history between our two people, this is really something special,” said Masterchef judge Ejal Schani.

Even the German ambassador to Israel expressed his delight at Franz’s success on the show. “This is about more than cooking, Tom is Israeli but here he is also the face of modern Germany.”