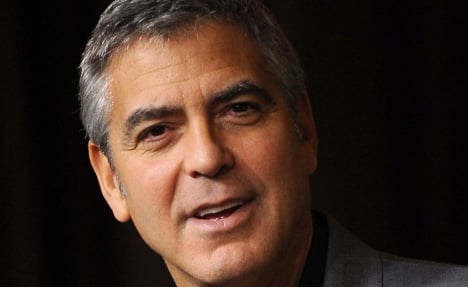 The man ate at the Grill Royal restaurant in the centre of the city on Friday evening – but when he went to pay the more than €100 bill, he found it had already been covered.

The waiter said George Clooney had paid it, fearing he and his friends who were at the next table, had disturbed the man by being too loud.

“That’s not true at all. They had behaved in a very cultivated manner. I was stunned,” the man told Monday’s Bild newspaper.

He left his business card at the Hollywood star’s table so he could one day return the favour – and even then did not recognize Clooney.

It was only after he left the restaurant that the man realized who had bought him dinner, he told the paper.

Clooney is in Berlin preparing to make his new movie The Monuments Men in Babelsberg, Potsdam.

He is expected to bring other big stars to town, including Cate Blanchet, Matt Damon, Jean Dujardin and Bill Murray to take part in the film which tells the story of art historians and museum curators who tried to save art looted by the Nazis before it was destroyed at the end of World War II.

A call for candidates to try out for extra parts in the film this weekend resulted in around 3,500 people queuing up in freezing temperatures for a possible role as a German soldier.