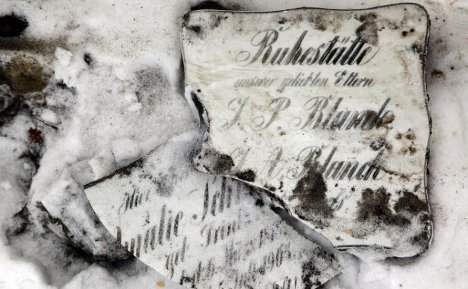 Barely an hour after digging into the ground in Baltijsk, a small coastal town near Kaliningrad, workers were faced with bones of German residents past, buried when the town was called Pillau.

Historians caught wind of the discovery and the town administration found itself in the firing line of local outrage. “The graveyard is clearly marked on up-to-date maps,” Valery Limonov, a history researcher.

How building permission was granted is a mystery to Limonov, who said that there should have been a geological survey prior to giving construction the go-ahead. The town council said that they had no idea though.

“From the outside there was nothing to see, the area has been used as parkland for decades,” said the council in a statement. It added that in now way did they want to hurt the feelings of the former inhabitants of Pillau.

See photos of the unearthed graveyard

The site became a park in the 1950s, when Soviets levelled the graveyard and was only recently earmarked as the location of Baltijsk’s new kindergarten. When built it should house 240 children, have a playground and a swimming pool.

Town residents also seemed wary about sending their children to school on top of an old graveyard. “A kindergarten on a cemetery? I would never forgive the town for that,” said one woman on regional forum NewKaliningrad.ru.

To cool anxious residents, the town council has agreed to exhume all 150 of the newly discovered bodies. It has tasked the moving them to a nearby church to a company used to digging up the dead.

The firm Avanport has plenty of experience exhuming German soldiers from the giant military graveyard in the area which lies in the dune hills next to the town. There are 13,500 people buried there from the Second World War.