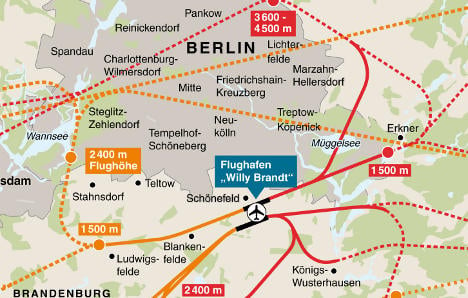 The court said on Wednesday that the risk of a plane crash or a terrorist attack involving the reactor at Helmholtz Zentrum Berlin (HZB), a large scientific research facility, had not been properly investigated when planning the “Wannsee” flight path.

Workers at the HZB, the councils of the Brandenburg villages of Teltow, Stahnsdorf and Kleinmachnow, as well as several private individuals had brought the case against the federal supervisory office for flight safety (BAF), which laid out the flight paths for the new airport in January 2012.

Aside from the dangers posed by the nearby reactor, the case had also included complaints about potential noise pollution, but the court did not even consider this, since the safety issue was already enough to send the BAF back to the drawing board.

“The risk assessments for the reactor in terms of air traffic” were “outdated,” the court said in a statement.

Matthias Platzeck, Brandenburg state premier and new chair of the troubled airport’s supervisory board, did not yet want to comment on the verdict on Thursday morning. “I have to read it in peace first,” he said, before adding that the BAF was responsible for laying out flight-paths.

On top of that, the European Commission is examining the possibility that two of its directives have been violated by the German authorities, on the grounds that environmental impact assessments have not been properly carried out for the planned flight paths, which cross nearby nature and bird-conservation areas.

The official opening of the new airport has been delayed four times due to a variety of construction delays, with the latest estimates putting the opening at no earlier than 2015.