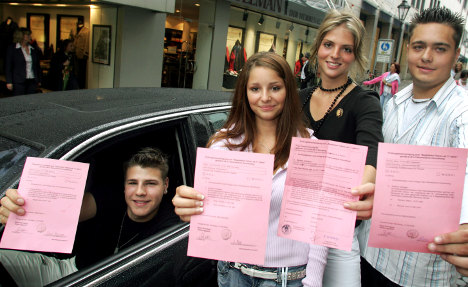 The Autoclub Europa (ACE) said it had obtained figures which showed that in 2011, 28 percent of those who took the German driving test failed and had to do it again.

A failure rate of around 30 percent is not a sign of a well-qualified training system, the ACE said, presenting its figures ahead of its annual meeting in Goslar, Lower Saxony. Around 1,900 traffic experts are expected at the three-day meeting where the driving test and driving training will be a central theme.

ACE spokesman Rainer Hillgärtner, said the numbers gave rise to the suspicion of a connection between the high failure rate and the bad financial situation which many driving schools were in – due to demographic developments which means there are fewer young people needing to learn to drive.

“They speculate on a high failure rate in order to be able to book in and charge for additional driving lessons,” he said.

There are also significant regional differences in the failure rate, according to the study, which was based on government figures.

The lowest failure rate was in Hesse, where just 22.14 percent of new drivers had to take a second or third test. Next came Lower Saxony with 24.87 percent, and Schleswig-Holstein with 25.13 percent.

The worst was Saxony-Anhalt where nearly 38 percent of those taking their tests failed. But Thuringia and Saxony were not far behind, with 36 percent of would-be drivers failing their first test.

Many foreigners living in Germany can simply swap their domestic license for a German one after residency has been established, but in some cases they will have to go through the entire procedure of preparing for, and taking a German test.