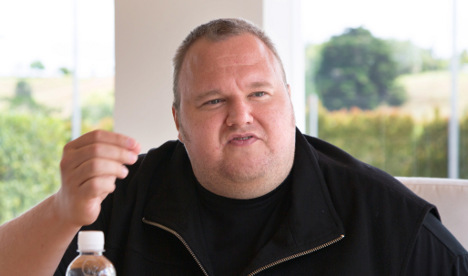 The 38-year-old German, who changed his name from Kim Schmitz, is now on bail as US authorities seek his extradition on a range of charges including money laundering, racketeering and copyright theft.

The mega.co.nz website, which replaces the outlawed Megaupload, went live at dawn, on the anniversary of armed police raids on the New Zealand-based Internet tycoon’s mansion in Auckland, which saw him arrested and the site shuttered.

Dotcom hopes the new venture will repeat the success of Megaupload, which

His lawyer Ira Rothken said they were satisfied the new service was legal and that Dotcom believed it was the “most legally scrutinised start up” ever.

The website offers cloud storage with state-of-the-art encryption to ensure only users, not the site administrators, know what they are uploading.

That would theoretically stop authorities from accusing administrators of knowingly aiding online piracy, the central allegation facing Dotcom in the

Despite the system overloads, Dotcom expressed delight with the rollout, tweeting within an hour of the launch that there were already 100,000 users registered in possibly the “fastest growing start-up in Internet history”.

Dotcom, who has a reputation as a showman, was dressed for the launch in the same attire he was on the day of the raid, and said he still felt resentment at the way he was treated.

“Yes, of course. We didn’t expect it at all and felt it was extremely unfair. 220 people lost their jobs overnight.”

Dotcom denies the charges which carry jail terms of up to 20 years.

While on bail in New Zealand, his legal team has enjoyed a number of successes challenging the prosecution case, including a ruling that the police raid was illegal and a government admission that Dotcom was illegally spied upon before his arrest.

His extradition hearing is due to be heard in August.