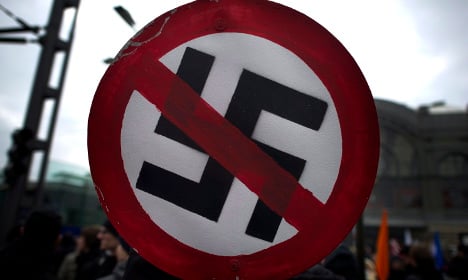 Tim H., a 36-year-old Berliner and father of a two-year-old with no previous criminal record, was sentenced on Wednesday to 22 months in jail for encouraging fellow demonstrators at an anti-Nazi rally in February 2011 to break a police barrier. His lawyer is appealing the sentence.

The Dresden judge ruled that because four policemen were injured as a result of that action, Tim H. is responsible. The Berliner Zeitung reported that Tim H.’s crime was “using a megaphone” at a demonstration in which 10,000 anti-Nazi protestors faced 3,000 neo-Nazis.

The district attorney admitted that Tim H. did not throw anything at the police and did not hit or otherwise injure any police officers. He was held responsible for the injuries because, in his view, Tim H. provoked the attacks by inciting the crowd via megaphone.

Sven Richwin, Tim H’s attorney, said the words “go forward, go forward” could be heard on the police video and there were no calls for violence.

Richwin doubts that his client can even be seen on the police video and the prosecutor’s main witness exonerated Tim H. Witnesses who viewed the demonstration from their balcony said Tim H. was not the person they saw behind the megaphone.

Nearly 500 demonstrators heeded the call from the organization “Nazi-Free Dresden” to protest the ruling in downtown Dresden. They yelled “We are all Tim” and protest speakers blasted the Dresden court, saying the ruling was a farce. Anti-fascist protestors are criminalized in Dresden, speakers told the crowd.

Top politicians from the centre-left Social Democratic Party, the Greens and the socialist Left party also condemned the sentence. Katja Kipping, the head of The Left, said the ruling was designed to scare others away. “I’m ashamed of this,” the Dresden-born politician said.