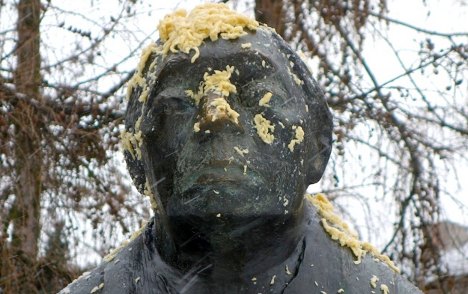 The BZ newspaper reported that the attack was aimed at the big monument of artist Käthe Kollwitz in Berlin’s trendy Prenzlauer Berg district – central to the debate sparked by criticism of the Swabians voiced by former parliamentary president and local resident Wolfgang Thierse.

Now a group has set up a website calling for the creation of a “Free Swabylon” in the area around Kollwitz square – and demanding the expulsion of Thierse.

He had in a newspaper interview criticized what he said was a takeover of the neighbourhood by the southwesterners and said they needed to adapt to Berlin customs and local jargon and not the other way around.

In a manifesto published on Tuesday online, the group called for an autonomous area, and singled out the Kollwitz monument as a “symbol of the authoritarian Berlin minority” in the area.

The manifesto said the Swabian population in Berlin had lived long enough under “foreign domination and discrimination.”

The group did not say if or when there would be another Spätzle attack. The paper said, however that the immigrants have shown that at least when compared to Thierse, they had a sense of humour.