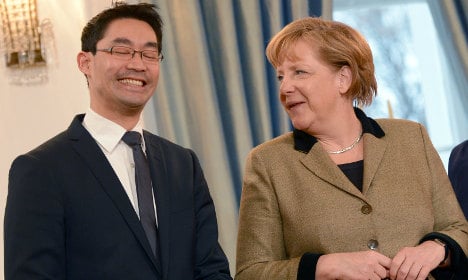 For a long time, Germany managed to remain immune to the economic difficulties plaguing many of its closest neighbours thanks to the deep and painful structural reforms it undertook years earlier.

But it, too, has started to feel the pain from the crisis, according to a whole range of different data published in the later months of last year.

“The difficult international environment was a noticeable burden on the German economy,” the Economy Ministry wrote in its latest monthly report on Friday, citing “substantial uncertainty arising from the euro area debt crisis” as well as other factors such as budget problems in the United States.

“Together with weakening demand for German exports, this is also hurting companies’ investment plans. As a result, the growth momentum has slowed over the course of the year. Available indicators point to a noticeable contraction in economic output in the final quarter of 2012,” the ministry said.

“Germany is an open and integrated economy so it is not surprising that a slowdown in the rest of the euro area has an impact here,” European Central Bank chief Mario Draghi said in November.

Official fourth-quarter gross domestic product (GDP) data are scheduled for release on Tuesday. And economists are pencilling in a contraction from anywhere between 0.2-1.0 percent.

Economy Minister Philipp Rösler has already begun to prepare the markets for a contraction, warning of “weaker-than-expected” output and overall annual growth of 0.75 percent for the whole of 2012.

That is a long way from the buoyant growth of 4.2 percent and 3.0 percent that Germany notched up in 2010 and 2011 respectively. But it is also equally far from the 5.1-percent contraction seen in 2009.

Traditionally, German exports have been the main driver of growth, but they have also made the economy vulnerable to downturns in neighbouring eurozone countries.

In November, the value of German exports amounted to €94.1 billion, down from €98.4 billion in October.

ING Belgium economist Carsten Brzeski said it would “take a miracle” for Germany to avoid posting a GDP contraction in the fourth quarter of 2012.

Nevertheless, economists are confident that such a contraction would not be repeated in the first quarter of 2013, meaning Germany would successfully skirt a recession, which is technically defined as two consecutive quarters of declining GDP.

“The outlook will quickly brighten again,” said the DIW research institute. The Economy Ministry thought so, too.” Overall, the German economy is still very competitive and in good health,” it said, pointing out that unemployment which is still close to historical lows will help buoy domestic demand.

Furthermore, with German-made goods still in demand outside the euro area, exports are unlikely to collapse completely.

“Given favourable sales prospects, companies will start to invest again, not least because of the very attractive level of interest rates at present,” said DIW economist Simon Junker.

UniCredit analyst Andreas Rees was similarly confident that the outlook for 2013 was “considerably brighter.”

The government, for its part, is pencilling in growth of around 1.0 percent for the current year.