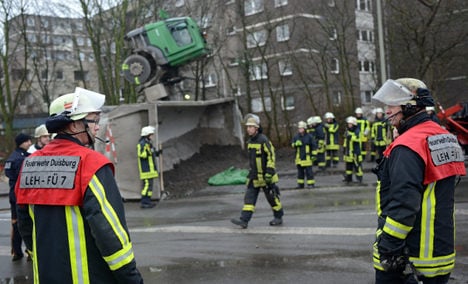 The accident took place at around 7am in the North Rhine-Westphalian city Duisburg, where a group of people were waiting at a bus stop.

According to regional paper the Westdeutsche Allgemeine Zeitung (WAZ), the driver is thought to have overlooked a traffic island and lost control, which ended with him tipping the trailer over and spilling gravel everywhere.

The driver’s cabin detached and span into the bus shelter, injuring two girls aged 10 and 17 who were taken to hospital with thigh fractures. One of the pair received emergency surgery which revealed further injury in other places. Three other children suffered less serious injuries.

The driver has been arrested for questioning and is, the WAZ said, thought to have sustained light injuries.

Emergency services at the scene were worried that there may have been another victim buried underneath the gravel truck and so lifted it up with a crane. Fortunately, there was nobody underneath.

Part of Uerdinger Straße, the site of the incident, has been closed until further notice in order to clean up.