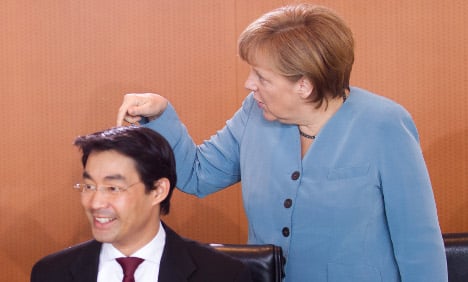 The government’s junior coalition partner managed to halve its figures in the space of three weeks, dropping from four percent in the run-up to Christmas to just two percent.

This was its worst Forsa score since mid-February 2012 and well below the five percent that the party needs in the autumn election to ensure representation in parliament.

But the dip will not worry Merkel, since her own conservative CDU gained another percentage point, putting it at 42 percent, a commanding poll lead over its main centre-left rival the Social Democratic Party (SPD), which dropped two points to 25 percent. It is the CDU’s highest level since she was first elected chancellor in 2005.

The poll boosts Merkel ahead of a critical election in the northern state of Lower Saxony on January 20, seen as a bellwether for the national election which is set for September 22.

The head of the Forsa polling organisation, Manfred Güllner, put the SPD’s decline down to their gaffe-prone candidate for chancellor, Peer Steinbrück, who has been dogged by communication blunders since the start of his campaign.

The SPD’s main hope of leading a government after the election is in coalition with the Green party, but despite a two-point rise to 15 percent for the environmentalists, the CDU still outscored the SPD and the Green party combined.

The socialist Left party also gained a point to get to nine percent, while the Pirate Party’s stagnation continued at three percent – not enough to enter parliament, but still beating the FDP.

The Forsa survey for Stern magazine and RTL television was conducted between January 2 and 4, with 1,503 voters polled.