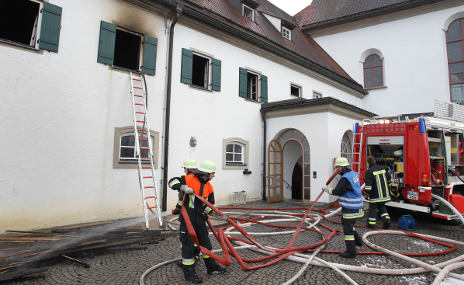 The centenarian was flown by helicopter to a specialist clinic having sustained life-threatening burns from the blaze at the monastery in the Bavarian town of Füssen in the Allgäu region near the Austrian border, police said.

Five further monks were taken to hospital to be treated for smoke inhalation. A fire fighter and a woman police officer were also hurt.

Around 170 members of the emergency services attended the fire and managed to get all the residents – aged between 42 and 100 – out of the burning building. Three escaped by climbing down ladders.

Fire fighters managed to prevent the blaze spreading to the rest of the building, but said their job was made more difficult by the monastery’s location on the edge of Füssen’s historic old town. By late morning, however, the fire had been put out.

The historic monastery, parts of which date back to 1628, sustained around €100,000 worth of damage and, according to police, numerous historical pieces of art were damaged.

Police said they thought the fire had started around 6:30 am in the residential area of the monastery, probably in the room of the 100 year-old man. Authorities were working to identify a cause on Sunday afternoon.