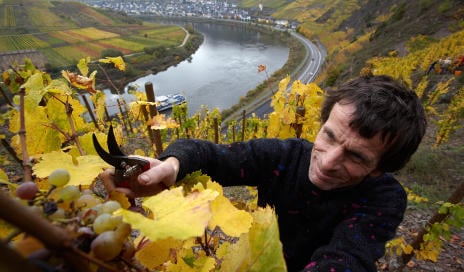 German wine producers fear that an increase in the number and size of vineyards could push them out of the market once new laws remove restrictions on the size, location and region of wine-growing operations.

A recent report by European Commissioner for Agriculture Dacian Ciolos the new laws could mean vineyards across the EU could increase in size by up to five percent every year, wrote the magazine.

German politicians have said they will resist the plan in a bid to save the nation’s small scale wine producers.

“We are extremely critical of the proposals,” said Baden-Württemberg’s Consumer Minister Alexander Bonde of the Green party. Opening up new sites for wine-growing would present a serious risk to existing traditional sloping vineyards in south west Germany, he added.

The new rules would mean that anyone could grow wine – even on a field in low-lying Mecklenburg-Vorpommern in north-eastern Germany. Grapes grown there would be of a lower quality but would require much less effort to produce than those grown on the slopes, said Bonde.

“This is about the survival of our vintners,” warned Bonde, whose criticism of the plans has received support from the German Agriculture Ministry.