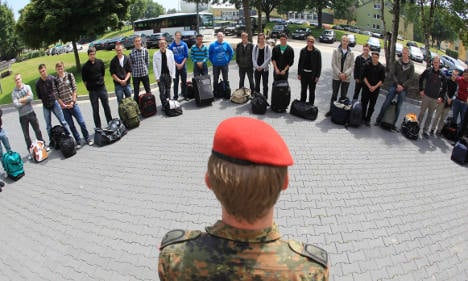 The 30.4 percent drop-out rate is an increase on a year ago when the rate was 27 percent. Defence Ministry figures released on Wednesday showed that 11,150 people completed a voluntary military service which lasts on average 13 months.

Defence Minister Thomas de Maiziére set a target of between 5,000 and 15,000 volunteers in July 2011, when compulsory military or social service was scrapped.

He said recently that the high drop-out rate was not a surprise. “Some recruits are obviously surprised when they are expected to show up with polished boots in the morning, have to sleep in a room with several other soldiers, or that they can only smoke during smoke breaks,” he said.

Interest in the voluntary social service is significantly greater, with nearly all 35,000 open places filled since the start of 2012. This is despite the fact that those signing up for voluntary military service are paid up to €1,146 a month while those doing social service get just €348.

Those who volunteer for social service are far less likely to break off their commitment early, with just 15 percent doing so, the Family Ministry said on Wednesday.