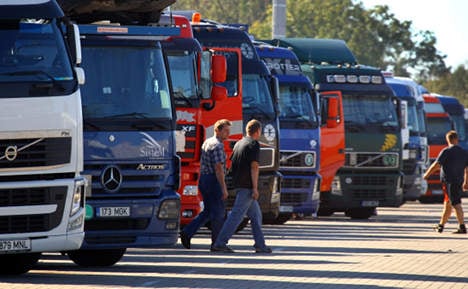 The top tax authority has recommended that truck drivers note down the duration and frequency of their ablutions in order to work out how much of their income should be written off from tax the Süddeutsche Zeitung newspaper said at the weekend.

Up until now, drivers had been allocated a €5 daily tax-free expenses allowance and even in March, the federal financial court agreed that this was an acceptable amount.

But tax authorities have decided this was not accurate enough and said that drivers must now keep receipts from overnight stays in car parks and comfort breaks at motorway rest stops.

Income tax experts voiced annoyance at the decision, with Uwe Rauhöft from the NVL – an umbrella group that represents income tax advisors – calling the note-system “a ridiculous, costly process.”

As parking spots tend to be in short supply along Germany’s motorways, truckers often park up in privately-run areas that charge around €10 to €15 per night – and generally includes a meal, the paper said. But because there is no tax consideration for this, tax offices often failed to acknowledge them as expenses.

Truck companies also would not pay these costs back, so costs often fell on the driver.

Tax expert Rauhöft suggested that for the system to work, drivers should file what part of a private-company charge was not used on food. But this would mean drivers keeping a “schnitzel book” alongside their toilet log.