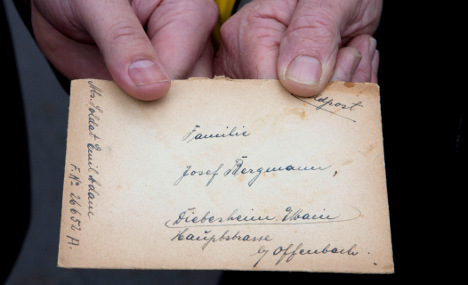 Stolen by a group of island youths in December 1941 as an act of defiance against the Nazis, the holiday letters first resurfaced in 2006. Now, after Jersey’s historical archive has catalogued their content, they have been sent on to their intended destinations in Germany.

“Merry Christmas and a healthy New Year wishes you Soldier Emil Adam. Greetings to Maier, Fischer and Melcher,” read a letter yellow with age delivered to Engelbert Josef Bergmann in Mühlheim am Main in the state of Hesse.

Addressed to his grandfather, the letter’s innocuous holiday message sent a wave of relief through the farmer.

“You don’t really know what to feel,” Bergmann said, after reading the letter.

Germany’s mail service Deutsche Post said some of the recently delivered letters had been rejected by people fearing they would expose the Nazi fervour of their relatives or neighbours during the war.

In total, 86 Christmas messages disappeared at the time.

“The archive asked us this year to deliver as many letters as possible to the addressees or their descendants,” said Michael McNally from the Jersey postal service.