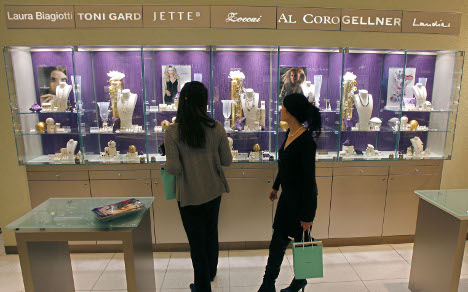 Sales to tourists of luxury goods – like expensive watches and jewellery – have shot up in the past year, a trend which looks set to continue, said the paper on Sunday.

A study by the Meisterkreis Association, an umbrella group of 55 luxury brand goods manufacturers and institutions, showed that Germany was an increasingly attractive destination for a new class of very wealthy tourists.

Mainly tourists and business travelers from Asia and Arab nations spent around €5 billion in Germany on luxury goods in the first nine months of 2012, an increase of 52 percent over the same period last year.

Accounting for 20 percent of high-end sales this year, “tourists are the biggest drivers of the industry,” Clemens Pflanz, managing director of Meisterkreis told the paper.

Chinese tourists were among the biggest spenders, splashing out a total of €1.5 billion on luxury goods in Germany in the first nine months of the year, way ahead of other likely splurgers, such as Russians, Swiss and visitors from the United Arab Emirates.

“Chinese (visitors) like to buy things in Germany and Europe because they can be sure that they aren’t in shops selling fake goods,” Pflanz told the paper.

Another reason to buy luxury goods in Germany is that they are cheaper than at home in Asia, where they are seen as important status symbols. Germany enjoys a reputation in China for good quality, well-made products, particularly cars, watches or interior-design items.

German holiday packages catering specifically for wealthy customers and geared towards culture and shopping are now widely offered in China, wrote the paper.