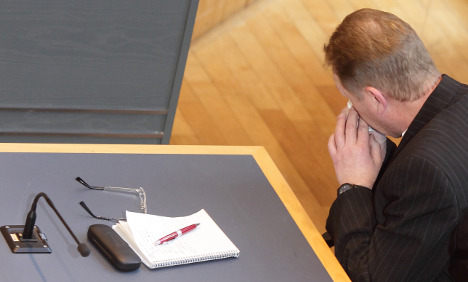 The policeman, named only as Andreas S., was the supervising officer on duty on January 7, 2005 when 21-year Jalloh, an asylum seeker from Sierra Leone, burned to death in his cell. The mattress to which he was shackled was set on fire with a cigarette lighter.

After a trial lasting nearly two years, the regional court in Magdeburg found Andreas S. guilty of negligent homicide by omission to act, as the senior officer failed to check on Jalloh even after repeated fire alarms went off.

The court heard how police officers even switched the alarm off several times before finally checking the jail cell and discovered Jalloh’s body.

Andreas S. had failed in his duty to look in the cell and should have reacted immediately to the fire alarm, said chief state prosecutor Christian Preissner, reported the Der Spiegel magazine on Thursday.

The officer received a fine of €10,800, nearly twice the amount demanded by the public prosecutor. Earlier charges of bodily harm with fatal consequences were dropped during the course of the trial due to a lack of evidence.

Along with a fellow policeman, Andreas S. had already been acquitted of negligent manslaughter of Jalloh in 2008 by the Dessau-Roßlau regional court. He was charged again when the case was re-opened in January 2011 after the Federal Court of Justice (BGH) said the initial verdict had been flawed.

The chain of events could not have happened as was presented during the trial, the court ruled. Judges were unable to determine whether Jalloh set the fire himself, or how it would have been possible to do so, calling it a “substantial gap in the consideration of evidence.”

The pair said they had tied Jalloh’s hands and feet because he had been violent after being arrested for harassing two women while under the influence of drugs and alcohol.

An exact sequence of events after Jalloh’s arrest has not yet come to light. In a separate civil case brought against Andreas S., Jalloh’s mother and brother claimed the victim must have already been unconscious when the fire broke out, because they said he could not have physically lit the fire when shackled by his hands and feet.

But the state prosecutor saw no evidence for this theory and rejected the plaintiff’s application for further clarification from fire experts.

Although he denied any wrongdoing in what the defence described as a chain of unfortunate events, Andreas S. said he still deeply regretted not having been able to save Jalloh, reported the website of Der Spiegel magazine.

As the verdict was read out, human rights activists stood outside the court holding placards reading, “It was murder!”