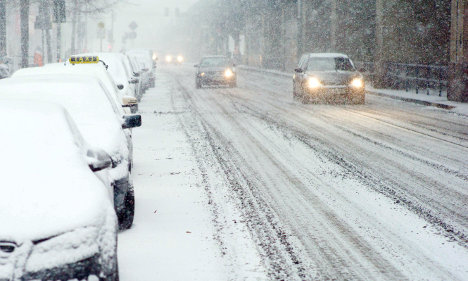 Police in Bavaria said there had been many incidents on the roads, with several motorists injured. A number of roads were closed on Monday in Lower Saxony and the Harz mountains after several lorries got stuck and some trees were toppled by the weight of the snow.

Click here to see more pictures of the weekend’s snowfall

Meanwhile, Deutsche Bahn has put a speed limit of 200 kmph on their fleet, in what a spokeswoman said was a security measure to prevent damage to the trains.

But Frankfurt Airport reopened on Monday, after hundreds of flights were cancelled over the weekend when Germany’s biggest airport was forced to shut down.

The brief rise in temperatures will be short-lived, however. Colder air will return by Monday evening as the current area of low pressure pushes south-east towards the Czech border, hitting Saxony-Anhalt with further snow and sleet storms during the day, according to the DWD.

Up to 10cm of new snow will fall overnight in many areas, with higher mountain areas seeing between 10cm and 30cm over the same period.

DWD warned that the new snow, coupled with strong winds in the south, will raise the risk of snow drifts, which along with ice and freezing rain could make life even more difficult for motorists.

Only the north and north-west is likely to escape the white stuff, which should fall as sleet or rain.

Temperatures could drop down to -15 at night in the Alps and Thuringia by mid-week, said the DWD. The bitter cold has already claimed at least one life, after a woman froze to death in a park in Saxony-Anhalt on Saturday night.

Has the storm hit where you are? We want to see your photos. Send them to [email protected]