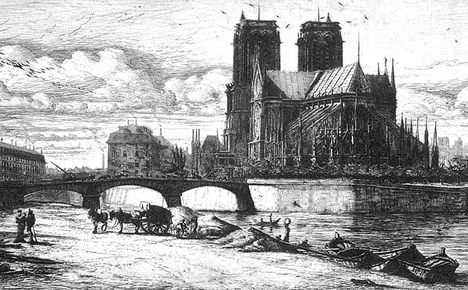 Jazz at the Berlin Philharmonic

Help UNICEF and go see some jazz this week. A new series called “Jazz at the Berlin Philharmonic” starts Tuesday when three shining stars of jazz piano tickle the ivories at the Philharmonic’s Chamber Music Hall. Polish pianist Leszek Mozdzer aka “the romantic,” joins German pianist Michael Wollny “the consummate master pianist,” and Finnish pianist Iiro Rantala “the natural phenomenon,” in solo, duo, and trio piano sets. Pieces by Bach and Chick Corea, as well as the performers’ own compositions fill the program.

Street lamps, telephone lines, and old Victorian homes. The Berlin-based artist and graphic designer Christian Rothenhagen made beautiful drawings of San Francisco during a visit to the Northern California city. His images of Berlin and Toronto join them at a new solo show that opens at Strychnin Gallery Friday. Marvel at the amazingly straight lines in his urban landscape illustrations.

One on One Exhibition

Have you ever looked at art in quiet solitude? Ever been alone in a gallery where the only set of eyes transferring their scrutinizing gaze onto the artwork is yours? It’s nice isn’t it. The One On One exhibition at KW Berlin features works and spaces intended to be seen or experienced by one person at a time. It’s intimate, confrontational, and an interesting way to consume art. Go Tuesday when an artist, curator, and historian discuss the “conflict between intimacy and public view.”

Surf’s up in Cologne this week when nine movies about surfing flash across the big screen. Follow the journey of brothers Julian and Joaquin as they venture from California to Argentina in “Gauchos del Mar,” or see historic footage from the 1960s and 1970s in the award-winning adventure sport documentary Last Paradise. The event kicks off with an art opening Thursday.

Big Cinema – The German Film Museum at the Staedel Museum

It’s not uncommon for art to play a starring role in film. On Saturday, the German Film Museum and the Staedel Museum present a series of cinematic classics, blockbusters, and rare film treasures that all incorporate celebrated artworks – from ancient cave drawings, to twenty-first century street art – in their frames. Though most are dubbed in German, three of the films, including Exit Through the Gift Shop (2010), The Mill and the Cross (2011), and Caravaggio (1986) will be shown in their original English language versions.

Two hundred years ago, Jacob and Wilhelm Grimm published their first book of children’s fairy tales. In honour of that marvelous event, Theatre Language Studio Frankfurt is staging a play about their lives. Penned by American playwright Lonnie Bradley, the two-act play weaves together the stories of two of the most imaginative brothers history has ever known. Take a seat in the audience this week and watch actors and shadow puppets portray the lives of these legendary storytellers.

The actor, photographer, and filmmaker Jack Smith was a pioneer of underground cinema in New York from the 1950s until his death in 1989. An exhibition at the MMK, which runs until January, focuses on Smith’s photographic work, and this week, actors from Städelschule’s Pure Fiction Seminar pay tribute to the avant-garde performance artist with an unconventional staging of Hamlet at Portikus. Wine and nudity take the performance a step beyond your traditional theatre in the round.

Captivated by Darkness – Charles Meryon and the French Etching Revival

Gargoyles and gothic arches are prominent in the etchings of Charles Meryon, a French artist who helped bring etching back into fashion in the mid-1800s. A collection of his work hangs at the Hamburger Kunsthalle this winter. Go and examine the exceptional precision of his scenes of Paris, including views of the Seine, Notre Dame, and The Conciergerie.

A live orchestra plays the music of Engelbert Humperdinck as a little boy and girl make their way through the woods. Follow the plight of that beloved brother and sister team Hansel and Gretel at Gasteig Saturday. The Bavarian Free State Theater’s stimulating operetta features seven soloists and a children’s choir. Who can blame them for not being able to resist that mean old lady’s candy covered gingerbread house? After the show, go home and build your own.

East Coast rap hits Bavaria Wednesday night when two of New York City’s most notorious MCs pick up the mic in Munich. “Throw your hands in the air and wave them like you just don’t care” as Method Man and Redman bounce around the stage and bust out their post-Wu Tang Clan rhymes. A whole crew of supporting artists gets the room heated up.

Who can resist a cover of “Tell Me Something Good?” And when it’s done with as much sass as Nina Attal’s rendition, you can’t help but get up out of your seat. Let’s hope the funky French soul singer includes the Chaka Khan classic in her set Tuesday night at Munich’s Jazzclub Unterfahrt, along with a few scathing solos on her Gibson.