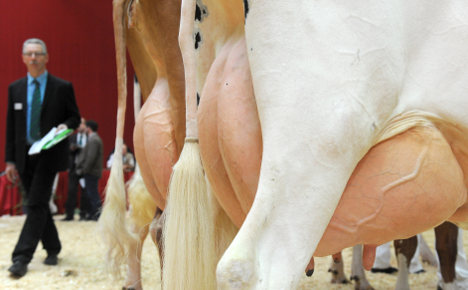 Cows produced 64 litres more during the 2011-12 season than the previous one, with the average yield being 8,237 litres, the association for quality control in animal production (DLQ) said on Monday.

“Milk production of German cows has never been higher,” said Folkert Onken, manager of the DLQ, which monitors the quality of most of the nation’s milk. Each cow produces around 400 litres more now than they did five years ago, he added.

He said the higher production was due to the trend for farmers to keep larger herds, and to operate “more professionally” than farmers with smaller herds.

Eastern German cows produce on average 9,101 litres a year – more than their western sisters, thanks to the more industrialized farms there – throwbacks to the once communist agricultural system.

An anomaly to the east-west rule was to be found in Osnabrück, Lower Saxony which was the district with the highest-producing cows, averaging 9,811 litres a year. This was said to be due to the area’s choice of well-bred cows.

Although the numbers might seem to be good news for those who like their cheese, for the cows it would seem to be less than positive.

The World Society for the Protection of Animals (WSPA) recently launched a campaign calling for an end to industrial dairy farming – and highlighted how many dairy herds are increasingly kept inside rather than out in fields.

“The German dairy sector has gone through a rapid and dramatic transformation in recent decades and is intensifying rapidly, with a growing proportion of cows permanently housed indoors. Germany is the largest producer in Europe and the country with the largest number of dairy cows, many of them still living in tie-stall yards,” the WSPA said when launching its Keep Cows on Grass campaign.