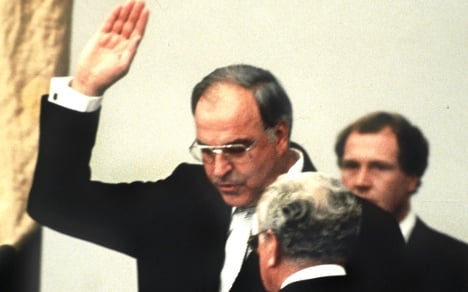 Kohl becomes chancellor in 1982. He knew about the service. Photo: DPA

The shadowy network had close ties with US President Richard Nixon’s foreign policy Svengali Henry Kissinger, who offered advice, and even discussed whether it was a good idea for the conservatives to usurp the government.

Political scientist Stefanie Waske spent seven years researching letters from politicians from the Christian Democratic Union and its Bavarian sister party the Christian Social Union – many of which concerned what they described as the “little service” – and will publish her full findings in a book early next year.

Some of those involved are still alive – but Kissinger for example, and the CDU/CSU, have refused to comment on the revelations, or even confirm what they did, Waske says.

It was the 1969 West German election which prompted the conservatives to set up their own secret service. They were kicked out of power for the first time since the establishment of the Federal Republic – and saw former allies the Free Democrats join Brandt’s centre-left Social Democrats to form a government.

The conservatives were fearful and mistrustful of his policy of talking with the Soviets and sending his secretary of state Egon Bahr to negotiate a treaty to swap West German recognition of post-war borders for a promise to not use violence against each other.

Conservative MP Karl Theodor Freiherr zu Guttenberg, (grandfather of the disgraced former defence minister) held a meeting in autumn 1969, not long after the election, with former chancellor Kurt Georg Kiesinger, Hans Globke who had served as chief of staff to Konrad Adenauer, and the CSU chairman Franz Josef Strauß.

They decided to form an “information service for the opposition,” a later note recorded, according to Waske’s work, which was explained in detail by the latest edition of weekly newspaper Die Zeit.

Being fresh out of office and extremely well-connected, they were able to call upon real spies to set it up for them, and contacted the former head of the foreign intelligence agency the BND for help. He offered up the BND’s own network of informants across the globe which he had established, including agents in the US, France, Austria, Italy, the Vatican, Arabic countries, Romania, the USSR and even at the United Nations.

The man they chose to head this new network was a BND staffer, Hans Christoph von Stauffenberg, cousin of Klaus, who had been killed after trying to assassinate Hitler.

Others who were brought into the scheme included Casimir Prince of Sayn-Wittgenstein, who would later play a leading role in and only narrowly miss imprisonment for the CDU’s party donation scandal. Suitably enough, he was in charge or raising hundreds of thousands of Deutsche marks to fund the spy service and he did so by tapping up his friends in industry.

One of the strongest links this service had was with Henry Kissinger, National Security Advisor under US President Richard Nixon, and later his Secretary of State. Ahead of the 1970 German-Soviet agreement, he and Brandt’s negotiator Bahr had agreed to open a back channel of informal information so the Americans could keep tabs on what the Soviets were saying.

But, Waske says, Kissinger was not confident Bahr was being candid, and it seems his office was feeding the information to the German conservatives. The Treaty of Moscow was signed, possibly confirming the fears of the CDU/CSU leaders that Brandt was doing business with the Soviets.

Stauffenberg went about his work, collecting information from sources around the world, including Brussels, London and Paris – as well as Romania and Yugoslavia, Taiwan and Cuba, and of course, the United States.

Meanwhile the position of treasurer was taken over by Alfred Seidl, formerly a Nazi party member out of conviction who not only acted as Rudolf Heß’s defence lawyer but also spend years fighting for him to be freed.

By the end of 1970, Kissinger was offering the conservatives’ spies advice on how to deal with the Social Democratic government. One agent who visited him quoted him saying, “It might be possible to overthrow the current government, but it remains to be seen whether this would involve risks which could put a CDU/CSU government in great difficulties.”

And he suggested the conservative opposition use delaying tactics to slow the ratification of the Treaty of Moscow in order to shift responsibility for its adoption firmly onto the government, rather than sharing it.

In 1971 when Brandt was talking about the administration of Berlin with Leonid Brezhnev in Yalta, Stauffenberg’s informants were delivering secret information to the conservatives – who were discussing it with Kissinger.

A year later Guttenberg died, leaving the service in the hands of Stauffenberg, who continued to operate his global network of informants for a decade.

The political secret service only began to come to light in 1982 when journalists from the left-wing magazine Konkret started to publish information about it from one of the top operators. The Bavarian state parliament started to investigate the suspicious use of nearly DM100,000 of Interior Ministry money – it was funnelled into the service.

Just as things were threatening to collapse for the conservative spy network, its existence became unnecessary after conservative Helmut Kohl took power in 1982. Soon afterwards, the “little service” was disbanded.