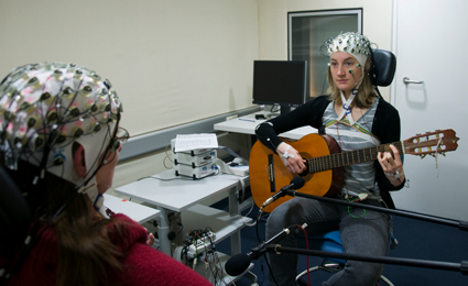 “It is not quite like a wireless internet connection, because we do not think that information is being exchanged. But there is a synchronization of brainwaves between musicians playing together,” Johanna Sänger told The Local.

Working with a team at the Max Planck Institute for Human Development in Berlin, Sänger gathered 32 experienced guitarists and created 16 duet pairs to play a piece of music together. They covered the guitarists’ heads with electrode caps to measure their brainwaves as they played and measured the results.

“It was a good choice to work with guitarists,” said Sänger. “The physical movements they make to play are not so influential on the brainwaves we were measuring. Violinists or flautists would be much more difficult as the movement of the chin or the hard blowing they do would affect our readings.”

She said the brainwaves of the paired guitarists synchronized as they played together – even though they were playing different pieces of the same duet.

“We found a statistical connection which was not tangible – but we think it is a functional synchronization. It might not be communication as we usually define it, but the brainwaves became synchronized – or mirrored.”

There was also a surge of brainwave synchronization when the musicians had to actively coordinate what they were doing – such as when starting to play. The areas of the brain active in the synchronization are those generally considered to be responsible for not only music production but also social cognition.

“We assume that different people’s brainwaves also synchronize when people mutually coordinate their actions in other ways, such as during sport or when they communicate with one another,” said Sänger.

She said the next step would be to see how this synchronization was different as time went on – would the musicians’ brainwaves become ever more similar the longer they played together? Or would this mirrored effect become less as the musicians learned to play the music together better, thus necessitating less coordination.

That is what she and the team are working on now – using a quartet of guitarists and looking at how the synchronization levels develop and possibly change as they proceed through rehearsals over the medium term.

Although Sänger’s work is currently pure research, she said it could eventually offer insight into psycho-physiological conditions such as autism.