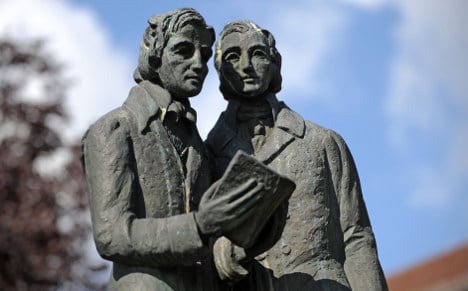 And although they would eventually become renowned scholars, it was their chronicling and adaptation of tales such as Rumpelstiltskin, Little Red Riding Hood, and Hansel and Gretel that would both make the Grimms famous and scare countless children around the world sleepless in the process.

Many of the stories to be found in their book “Children’s and Household Tales” – first published in 1812 – were gathered along a tourist route that weaves through the German states of Hesse and Lower Saxony, from Hanau in Frankfurt to Bremerhaven on the North Sea coast.

Known as the Fairytale Road, it travels about 700 km through misty valleys and shadowy woods, past old witch towers and stony silent citadels.

I start more or less right in the middle of the route in Kassel.

The Grimms moved here as teenagers, and worked as librarians and academics. It was here that they became acquainted with the renowned storyteller Dorothea Viehmann, who was born in the city and is believed to have first told the brothers the story of Cinderella.

Despite the widespread destruction suffered by the city in World War II, some architectural gems remain and one of them, the 18th century, baroque-style Palais Bellevue, is home to Kassel’s Brothers Grimm Museum.

“The museum is unique,” says its director Bernhard Lauer. “It is the only museum devoted totally to the Brothers Grimm; a place where you can get a total overview of their lives and their work.”

There are relics such as furniture from the Grimms’ home, as well as original illustrations to their stories – and it all builds up to the jewels in the museum’s crown – first and second editions of the fairy tales.

“You can feel the atmosphere of the 19th century here,” said Lauer, adding that the museum eschewed modern technology such as computers or videos in the exhibits in order to create an “authentic experience” of what life was like in the brothers’ time.

Which is not to say that young visitors will be bored – every three months, the museum has a new interactive children’s exhibition themed on a different fairytale.

“We offer this exhibition not only in German, but also in English, Russian and Turkish, so that children from different traditions in Europe come together and play,” said Lauer.

And with a head full of images and stories, the ideal place for a stroll is Kassel’s magnificent Schlosspark Wilhelmshöhe. It flows down the side of a hill overlooking the city to a glorious half-crescent palace. There is a giant statute of Hercules at the top, and Löwenburg, a medieval castle, hidden amongst its trees.

Sitting beneath the palace’s towering columns on a sunny afternoon, it’s not difficult to picture horse drawn-carriages ferrying glass-slippered maidens to aristocratic balls.

The following day the journey turns northwards past the town of Sababurg and Dornröschenschloss, the castle that supposedly inspired the story of Sleeping Beauty.

Set amongst rose gardens and ancient oaks, its spiral staircases and domed turrets are now part of an upmarket hotel. But you don’t have to be a guest to visit and for a small fee visitors are permitted to swan about its lovely grounds dreaming of princesses and princes.

The River Weser leads through gentle hills lush with forests and pasture land to the village of Bodenwerder. Now popular with cyclists biking the Weser valley, the town was once home to another famous story teller, Baron von Münchhausen.

There is a fun little museum set up to celebrate his adventures including his claim that he once rode a cannonball fired in the direction of his enemies but after realising the folly of his actions, leapt on to another heading the opposite way.

Everyone has a tale

A wander along the riverbank and through narrow streets flanked by half-timbered shops and cafés lead to a drink in the beer garden of the Goldener Anker hotel while the pleasure boats chug by.

Fittingly, the hotel’s friendly proprietor Karl-Rudolph Schoppe tells a tale about his great-great-great-grandfather who was fishing on the Weser when he found a 100-kilo “golden anchor” – reputedly Russian gold left behind by retreating Napoleonic soldiers. He sold it and used the proceeds to build the eponymous hotel in 1837.

From the Baron’s town, it’s only a half an hour drive up the road back to the Grimms – Hamelin.

Along with Bremen to the north, and its famous musical animals, Hamelin is one of the few actual towns along the Fairytale Road to feature in the Grimms’ tales.

Put on the map by the Pied Piper, the town continues to embrace its association with the Rattenfänger or rat catcher. He can be found on everything from coffee cups to restaurants while costumed tours relive his deeds and a bronze statute of him stands proudly in the main pedestrian area of the town.

The town’s cobblestone streets are rich with colourfully painted and inscribed half-timbered buildings and there are some lovely examples of Weser Renaissance architecture. One of best is Hamelin’s most famous building, the Rattenfängerhaus.

A stunning edifice adorned with intricately decorated stonework, a plaque on the side of the building commemorates the Pied Piper’s exploits and inside its restaurant offers all sorts of rodent themed treats including “rat-tail” flambé and home-made “rat-killer” liquor.

“We have visitors from Japan and China and England, as well as tourists from America, from Denmark, from everywhere actually,” said Rattenfängerhaus owner Christina Hartlieb-Fricke. “Most come from Japan and China, though, and they come for the rat-tail flambé, a dish my husband invented about 45 years ago.”

It’s delicious, although on closer examination, the flambéed rodent tails turn out to be strips of pork cooked in wine. But, like much that lies along the Fairytale Road, the most fun is to be had by indulging in a little fantasy.