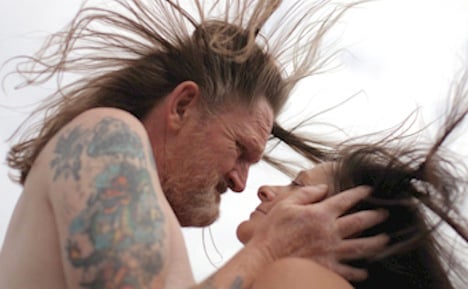 Photo: Hail at The Berlin Festival of Festivals

Around the World in 14 Films – The Berlin Festival of Festivals

From Switzerland to Senegal, China to Chile, film fans can embark on a cinematic trip around the world this week in Berlin. Kino Babylon presents independent films from fourteen different geographical regions. Benh Zeitlin’s 2012 Sundance star Beasts of the Southern Wild opens the festival Friday night with its inspiring tale from the Louisiana bayou. Bring your hankies.

Death, sex, kids. Scary stuff! The UK theatre company Imitating the Dog, and playwright/director Pete Brooks have created a haunting play about a hotel night porter unable to remember his past. Live action merges with video projection and a fascinating war-time narrative in what the Yorkshire Evening Post calls “a piece of art in its own right.” Get swept up in “Harry’s” story when Hotel Methuselah premieres in Germany this week.

Every two weeks, funny guys and gals from around town gather at a neighborhood bar turned art space in Mitte. There might be some live music, usually there’s a DJ set, there’s always lots of laughs. And the best thing is, it’s all in English – your good old mother tongue, or maybe it’s your second language. Whatever it is, you speak it, you understand it, you actually get the joke. Brilliant. Join in on the fun Thursday at Naherholung Sternchen. We could all use a few laughs.

Stomp your feet to the beat of the drum and sway to the rhythm of the kora. Musicians from Germany, Senegal, and Gambia celebrate the majesty of the African night sky Sunday at the Rautenstrauch-Joest-Museum in Cologne with an evening of West African music. Percussion and dance group Mama Africa shares the stage with Aziz Kuyateh, Sidiky Coulibaly, Hayden Chisholm, and the famous German street musician known simply as “Klaus the violinist.”

In 48 BC Julius Caesar met Cleopatra in Egypt, commencing one of the most legendary love stories of all time. In 1724 the Baroque composer George Frideric Handel’s opera based on that extraordinary affair premiered on the London stage. As riveting now as it was nearly three centuries ago, the story of Giulio Cesare in Egitto (Julius Caesar in Egypt) unfurls in Frankfurt this week. Get carried away by the drama of it all Sunday when Frankfurt Opera’s new production premieres with baritone Michael Nagy and soprano Brenda Rae in the leading roles.

Times: Sunday, December 2, 6pm (Premiere); Performances continue throughout the months of December, January, and May, 2013

Down near the French border, the little mediaeval town of Gengenbach in Baden-Württemberg has become famous for a very special holiday attraction. Every November, the town hall transforms into the world’s largest Advent calender. Each night until December 24, one of the nineteenth century building’s twenty-four windows opens to reveal a magical surprise. Go and immerse yourself in the enchanting atmosphere that descends on Gengenbach each winter. The splendour starts Friday.

Christmas Traditions From Around the World

In Sweden they put a bowl of porridge on the window sill. Italians bless the poor. And Father Christmas wears shorts in Australia. Learn more about how the holidays are celebrated in other cultures at Spicy’s Spice Museum. The exhibition “Christmas Customs and Goodies From Around the World” offers visitors a chance to taste homemade spice punch, cinnamon coffee, and other seasonal delights from nations near and far.

Each year, the Gewandhaus Orchestra holds a concert on the first weekend of Advent dedicated to children who live in poverty. Proceeds from the concert go to the Leipzig Helps Children organization which gives less fortunate children in Germany opportunities that wouldn’t normally be available to them. Conducted by Christian Vásquez, this year’s concert features the mezzo soprano Vesselina Kasarova who joins the Gewandhaus Orchestra in works by Georges Bizet, Jose Pablo Moncayo, and Arturo Marquez.

A trio of bluegrass bands are plowing an Appalachian trail through Germany this month. Hitting up eighteen cities and towns between Stuhr in Lower Saxony and Kempton in the Bavarian region of Allgäu, the Americana-inspired musicians stop in Munich Sunday. Join the jamboree at Amerikahaus and rock out with Audie Blaylock and Redline, Bearfoot, and Caleb Klauder and Reeb Willms.

If you’ve been meaning to get down to the Arp Museum in Remagen, just south of Bonn, here’s a little incentive. On Sunday, the museum celebrates the start of the holiday season with a day devoted to Christmas crafts, a choir concert, and a special fairytale tour guided by the Snow Queen and Father Frost. Housed in a former train station, the museum features works by Dada founder Hans Arp and his wife Sophie Taeuber-Arp, and holds exhibitions of celebrated nineteenth and twentieth century artists. The current show focuses on impressionist paintings with a wintertime theme like Monet’s “Houses in Snow.”