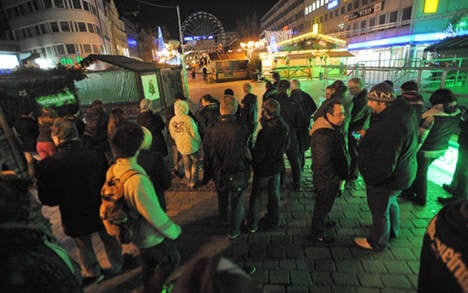 Experts soon realized that the bomb buried near the A40 motorway, had an unstable, chemical fuse and would have to be blown up safely rather than defused. This required 700 tonnes of sand, brought in by 30 trucks, to be dumped around of the blast site.

Around 4,200 residents from a 750-metre radius in the North Rhine-Westphalian city were told to leave their homes at around 4 pm on Tuesday. A large stretch of the busy motorway next to the bomb was shut off, causing traffic jams to block up the city centre.

People living in a 1,250-metre radius around the site were told to keep their windows shut and not go outside. Ships due to travel down the busy Ruhr had to wait outside the city, causing a backlog, regional paper the Westdeutsche Allgemeine Zeitung said.

“Duisburg is used to bombs,” one evacuated resident told the paper. In fact, seven bombs from World War II have been uncovered in the city already this year.

The situation began to get complicated when an entire elderly people’s home had to be emptied. This took much longer than anticipated and only got underway later on in the evening, due to “an extremely large logistical effort,” a statement from the city said.

This meant that the detonation was pushed further back, and was eventually around four hours later than planned.

But luckily it went without a hitch and has not appeared to have caused any serious damage. Duisburgers were allowed to return back to their houses at around 10:30 pm, after a long night of waiting.