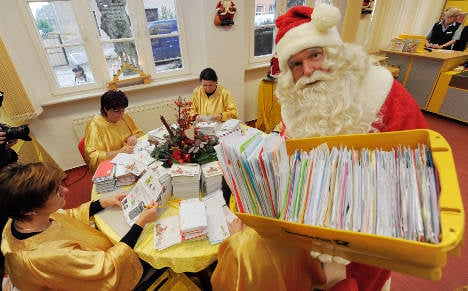 More than 3,000 have already arrived in the Christmas sorting office in Himmelstadt, Bavaria. These ones are addressed the Christkind, the infant Jesus who traditionally brings gifts to children in southern Germany on 24 December.

That is just the beginning, said Rosemarie Schotte, who has run the Himmelstadt office for almost 20 years. “By the end of the season we’re sure to have more than 80,000 again,” she said.

Each one gets a reply in an envelope bearing a special stamp and of course the postmark showing where it was sent from – and, Schotte told The Local, if the letters are in English, they’ll receive a reply in English.

Elsewhere in Germany, requests are made to instead to Father Christmas – the Weihnachtsmann – or to St Nicholas, who delivers his gifts on 6 December.

Most children send their Christmas wish lists. Few seem to beat about the bush in stating their preferences. “The kids are always bang up to date, especially as far as toys are concerned. Whatever’s just come on the market often ends up on the lists,” noted Schotte.

Others write with more personal problems such as requests for help, for sick relatives or from irritating siblings. These too receive individual replies.

“If the children have made a really special effort, then we write a few extra lines,” said Schotte.

Many of the elves are volunteers; the postage and organisational costs are met by Deutsche Post.

Though for the sake of frazzled parents up and down the land, let’s just hope that Santa doesn’t dish out too many rash promises amidst all the festive good-will.

Children hoping to boost their hauls should write to the following addresses, making sure that their own details are legible. Most will deal with English letters and reply in English.