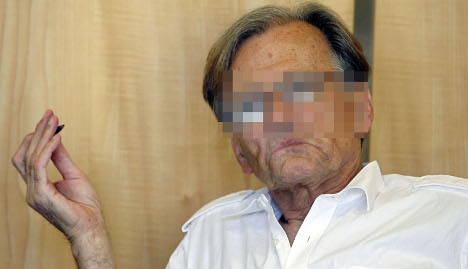 Dieter Krombach, 77, was sentenced last year to 15 years in prison for killing his step-daughter Kalinka at their German home in 1982. But he only faced trial after being kidnapped in Germany and dumped, tied up, outside a French court.

In a case that captivated France, Kalinka’s biological father, Andre Bamberski, took the law into his own hands after Germany refused to hand Krombach over, employing a team of kidnappers to drag him to France before dumping him near a courthouse.

Krombach’s appeal is based on the vigilante action. His lawyers will argue that his trial in France was illegal because of the manner in which he was brought to the country. Bamberski, 75, is also facing charges of kidnapping in the case.

Kalinka was found dead in her bed at the home she shared with her younger brother, her mother and Krombach and their two children near Lake Constance in

An autopsy proved inconclusive as to the cause of death, but forensic examinations of the body called into doubt Krombach’s account of her final hours.

A German investigation into her death found there was not enough evidence to charge Krombach but Bamberski, convinced the German had raped and killed his daughter, brought charges against him in France.

A French court in 1995 found him guilty in absentia, but Germany refused to send Krombach to France and the conviction was eventually overturned. Krombach’s credibility was weakened in 1997 when the cardiologist was convicted of drugging and raping a 16-year-old patient, handed a suspended sentence and had his licence to practice revoked.

In October 2009, frustrated by Germany’s refusal to send Krombach to France, Bamberski hired a kidnap team who snatched the doctor from his home in Scheidegg, brought him to France and left him, bound and gagged, near the courts in the border town of Mulhouse. Krombach was promptly arrested.