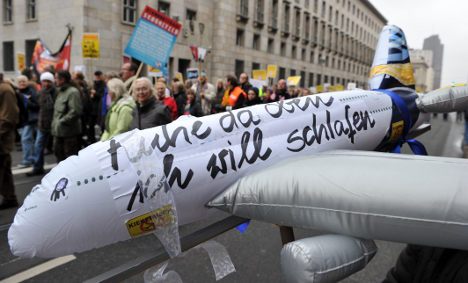 Organisers said 4,000 people took part in a demonstration march in Berlin culminating in a rally outside the national headquarters of the opposition Social Democratic Party (SPD). Activists demanded the party rethink their policy on aviation noise pollution, an issue which has disappeared from their manifesto.

Using the opportunity presented by the upcoming 2013 elections, protesters held banners dismissing the Social Democrats as the “party of the air noise pollution supporters, no longer electable.”

Protesters said they hoped to raised awareness of the health dangers associated with aviation noise pollution. Berlin demonstrator Annerose Seifert pointed to a recent study into the health of those living near the Cologne-Bonn airport, which shows people living in flight paths are at higher risk of suffering heart attacks and developing circulation problems or breast cancer.

“Society shoulders the cost of treating these diseases, the airline companies do not share their profits,” she said.

Seifert is a member of a citizens’ campaign group from Treptow in south-east Berlin – due to come under the flight path of the new Berlin-Brandenburg airport, scheduled finally to go into operation next October after long delays.

Others have been campaigning for years for an improvement to the learning conditions for children in the Frankfurt Airport flight path. “Our children have to stand between 30 and 60 aeroplanes thundering over the school every hour,” Otto Doermer of the parents’ council at the Martin-Buber School told the Frankfurter Rundschau regional newspaper on Saturday.

Meanwhile, several hundred environmentalists and citizens living in the flight path of Munich airport gathered outside the headquarters of the conservative Christian Socialist Union (CSU) headquarters to demand not only a nighttime ban on flights, but also that plans to build a new runway be shelved in accordance with the “no” vote given in a city referendum in June.