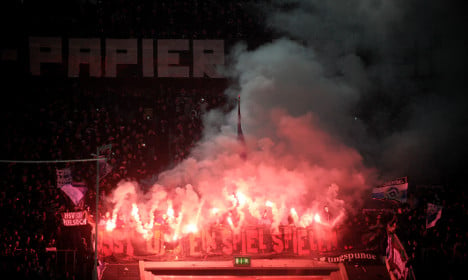 Hamburg’s players are reeling after an unfortunate 24 hours saw a string of disasters befall the club before, during and after the game against Fortuna Düsseldorf on Friday night.

It all began when Hamburg fans set off fireworks in the stadium just before kickoff, setting a giant HSV banner on fire, delaying the start of the game by five minutes while the fire brigade got the blaze under control.

The next disaster struck when the club’s Dutch midfielder Rafael van der Vaart sustained a suspected hamstring tear during a tackle in the 29th minute. The 29-year-old star was left clutching his right leg and is expected to miss at least the team’s next four remaining games before the winter break.

“It feels like a tear,” the ex-Tottenham Hotspur and Real Madrid midfielder told Kicker magazine.”It will be difficult to play again this year.”

Winners Düsseldorf went on to score two goals against the unlucky team, who trudged back to their hotel hoping to relax after a bad night.

But then to top it all, an alarm dragged the Hamburg players and the rest of the hotel guests out of their beds and into the street at 4:30 am. A fire extinguisher had been set off on the 12th floor, although there was no fire, wrote the paper.

The team seemed to take it all with good humour, however, breaking the news to fans with the following tweet: “Hotel evacuated. Weekend just keeps getting better.”