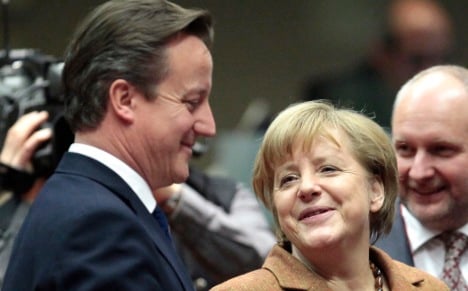 A British official said the German chancellor was “sympathetic” towards London’s position. The talks quickly led to the duo being dubbed “Merkeron” or “Camerkel”.

“Germany did not want to isolate the United Kingdom and France wanted cohesion countries, attached to growth policies and the common agricultural policy, to be heard,” said Hollande.

So-called cohesion countries, led by Poland and Portugal, benefit from EU funds used to help poorer regions catch up economically and socially with more developed ones. Cohesion funds are the second biggest item of EU expenditure after agriculture subsidies.

But with the 27 leaders bitterly divided over spending policy, there was little hope that a deal on the trillion-euro budget could be reached at the two-day summit.

Hollande said the British premier came to the talks with a “set priority” to “protect the British cheque” – or rebate – and showed no willingness to contribute to similar deals with other EU partners.

“I too could say that I want my discount,” he said adding that Britain was a smaller net contributor to the EU budget than France.

Hollande said France and Germany, whose agreement is usually required in order for tough EU deals to finally break through, were at the “centre” of the negotiations.

“France and Germany played their role perfectly to advance Europe (though) without completing the deal today,” he said, playing down talk of a failed summit.

“This council was useful” and was “a stage” towards finding a budget deal, Hollande said.