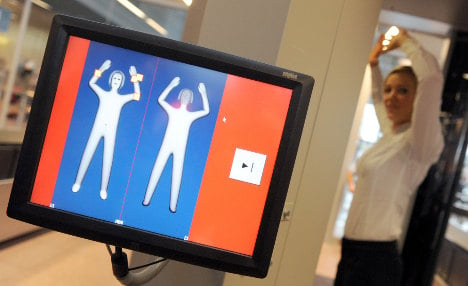 “We are the first to use the new generation of body scanners,” said police spokesman Christian Altenhofen at Germany’s largest airport on Friday. He was keen to distance the new devices from those which performed badly when tested in Hamburg airport in 2010-2011.

Federal Interior Minister Hans-Peter Friedrich said he would not consider deploying the earlier generation of scanners at airports nationwide because they too often set off false alarms.

But now, a police statement said, “the improvement in performance since then allows the deployment of this forward-looking technology.”

Only passengers heading to North America from Frankfurt will be encouraged to walk through a full-body x-ray scan, due to the higher safety requirements for this destination, explained police.

European Union rules stipulate that passengers cannot be forced to walk through the machines, which faced fierce opposition from privacy campaigners, particularly in Germany. Opponents said the scanners showed the passenger nude.

However, police say the new scanners do not show actual body images, but mark the places to be checked by airport staff on a pictogram of a body. Meanwhile, police insist the machines do not present any health risk.