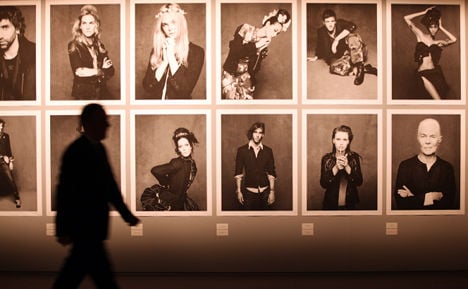 If there’s only one thing in your closet, it better be a little black jacket. Preferably with a logo of interlocking C’s. Chanel’s iconic design is a wardrobe staple. Timeless. Classic. Looks good on everyone, with everything. Karl Lagerfeld photographed celebrities from Laetitia Casta to Sarah Jessica Parker wearing the indelible item for a new book and exhibition, which opens Friday in Berlin. Go and gaze at the beautiful people.

An author’s dream is to have John Updike say your writing is like Proust’s. This is what the late “Rabbit” author said about American writer Andrew Sean Greer’s novel The Confessions of Max Tivoli. His next novel A Story of a Marriage got its fair share of praise as well, earning a “Book of the Year” award from the Washington Post. Greer holds a reading and discussion at the English Theatre Berlin Monday.

Surround yourself with good people Thursday night and stuff your face on the best meal of the year – Thanksgiving dinner! The artist network organization Agora is hosting a grand buffet in honour of the beloved American holiday. Turkey, mashed potatoes, and pumpkin pie, oh my! Can a German cook up a proper Thanksgiving meal? Find out.

Family Brunch at the Zirkus Fabrik

There’s always something fun going on at Zirkus Fabrik (Circus Factory). This week, it’s a family brunch. Munch on cheese and salami while the kids learn how to romp around like a clown. Live music and improvisation will have everyone enthralled until nap time.

Don’t you just love a good church bazaar? Cologne’s St. Vitalis’ Catholic Church is holding their annual Advent bazaar to kick off the Christmas season this weekend. Go and rummage among the used books, second hand clothes, and other odds and ends. There’s no knowing what treasures you might uncover. Food, drink, and activities for the kids make it a grand affair for everyone.

Don’t you love it when French people sing about “l’amour?” Francoiz Breut does it perfectly, merging just the right amount of sultry innocence with matter of fact despondence. Then there’s the sweetly nostalgic Fredda who peppers her upbeat tracks with English words like “Ellis Island” sung in an irresistible accent. The pair share the bill at Brotfabrik in Frankfurt Tuesday. DJs from their label Le Pop play the after party.

A lot of artists spend a period creating work based on the human figure. But not Thomas Scheibitz. Until now that is. The German painter’s new exhibition at the Museum of Modern Art in Frankfurt is his first solo show where the human form plays a leading role. His work has always dealt with the relationship between the figurative and the abstract, incorporating a palette of vivid colors in works defined by geometric motifs. And the paintings in “One-Time Pad” stay true to that aesthetic, except this time around you might notice the curve of a hip, an arm extended, some semblance of a face. See for yourself in Frankfurt this week.

It’s always a treat to catch a Rufus Wainwright concert. His latest album Out of the Game was produced by Mark Ronson, and includes all the danceable decadence you’d expect from a collaboration between the dramatic American-Canadian tenor and the acclaimed English producer. Experience the glamour Wednesday at Laeiszhalle.

A master of the monologue, British playwright Alan Bennett wrote a dozen one-character episodes for the BBC in the 1980s and 1990s. Known collectively as “Talking Heads,” the series is a true treasure of British television from the era. This week, the Hamburg-based Rover Rep Theatre is staging two of these gems – “A Bed Among the Lentils,” and “A Chip in the Sugar,” which is the only episode where a second character shares the scene. Take a seat in the audience and smile heartily at Bennett’s humour.

Four circuses, hailing from Vietnam, Columbia, Morocco, and the Czech Republic present extraordinary spectacles this season at Munich’s Tollwood Winter Festival. Weaving acrobatics, juggling, music, and theatre, “Lang Toi-Mon Village” opens the five-week affair Tuesday night. Make your way to the illuminated tents at Theresienwiese and watch as the performers relay a fascinating story based on a day in a traditional Vietnamese village.

Don’t expect any gypsy guitar tracks. The four Scottish chaps in this London-based band released their eponymous debut disc last summer and it’s all about psychedelic journeys with a synthesizer (and some electric guitars). The Guardian compared them to the Byrds, the Beach Boys, the Rolling Stones, and Beta Band all in one review. Do the Edinburgh art school boys live up to the hype? Find out Sunday in Munich.