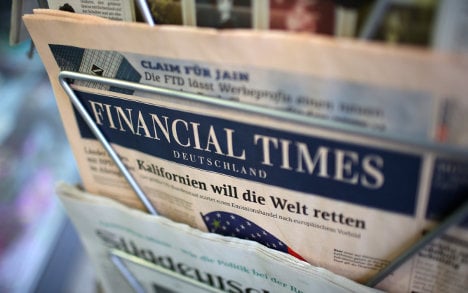 “We are waiting for the decision of our publishers, then we will look to the future,” the brief statement said.

The financial daily’s editor Steffen Klusmann had already printed an article in the paper on Tuesday saying that the publishers were “considering different options in the face of the losses this newspaper is posting.”

The executive board of the paper’s publisher Gruner + Jahr was expected to meet in Hamburg on Wednesday afternoon to decide the paper’s fate, but insiders are said to be extremely pessimistic about the paper’s chances of survival.

“There is not a single person in the newsroom who believes the newspaper will continue,” an unnamed journalist who has been at the paper since its launch told news agency Reuters.

The Frankfurter Allgemeine Zeitung also reported that the closure was a done deal, and that G+J’s economic magazines Impulse and Börse Online would also be sold.

The FAZ also said the FTD had lost €10 million this year, and that all of G+J’s financial titles, which are run from one office, had lost €15 million in total.

The FTD’s official daily circulation is 102,000, though a significant proportion of that is reportedly given away in airports and railway stations.

But G+J has refused to comment on the reports, other than to say that no decision had yet been made about the future of the FTD. Wednesday’s meeting could well last into the night, and a final decision may not be made until later in the week, the Hamburger Abendblatt reported.

The German journalists union DJV has called on G+J to not concentrate any cutbacks on its journalists.

The FTD was launched in 2000 as an affiliate to the British Financial Times, but ownership passed into the hands of G+J, owned by Bertelsmann media group, in 2008.

In the meantime, the Frankfurter Rundschau newspaper, which filed for bankruptcy last week, could well be saved by a buyer, a spokesman for insolvency administrator Frank Schmitt confirmed on Wednesday.

The spokesman did not name any of the potential buyers, but confirmed that there had been some interest from abroad in the struggling daily.

“From initial talks, we have the feeling that there is serious interest,” the spokesman said, though he added that negotiations were still in the very early stages.

The Frankfurter Rundschau, first published at the end of World War II, and its associated printer, reported massive losses in its advertising and printing businesses last week. The owners – the M. DuMont Schauberg and DDVG media groups – said the paper had lost €16 million this year alone.

The paper has continued to appear every day, and the 500 people employed by the paper and its subsidiaries will continue to be paid until January, by when Schmitt must submit his report to the bankruptcy court.