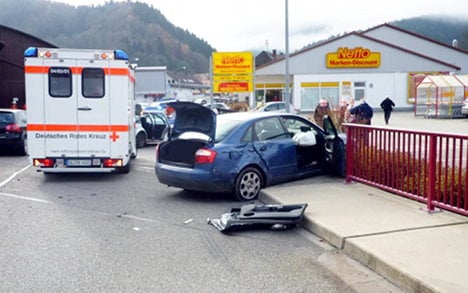 The teenager was found on Friday in the boot of a car in the German city of Offenburg, close to the French border, after her disappearance from her home in the village of Barjac in the Gard region sparked a nationwide hunt.

She was only found by accident by German police after they tried to stop the car and the driver crashed. The girl was tied up in the boot.

The 32-year-old driver of the car was held by police initially on suspicion of kidnapping.

The head prosecutor in Offenburg, Herwig Schäfer, said he expected the regional appeals court in Karlsruhe to decide on the matter “within a few weeks.”

At a press conference on Monday, Schäfer said the suspect had been driving a stolen car in the village and came across the girl by chance.

“By chance at that moment she was coming home, he saw her and decided to kidnap her,” he said, adding that the suspect had provided very little other information to investigators.

A French judicial source said Monday that rape charges had been added to the probe, though investigators have refused to confirm whether the girl was sexually assaulted, citing the ongoing investigation and a desire to protect the victim.

The girl is now back at home with her family. Her father told journalists on Saturday how proud he was that she had kept a cool head during her week-long ordeal.

“She was strong-willed,” the Dernières Nouvelles d’Alsace newspaper quoted him as saying. “She remembered a number of details and knows the car’s licence plate number by heart.”

Chloe’s father said he had expected her to arrive home a complete wreck, but that “she acted as if she had come back from holiday.”

But the teenager’s mother said her daughter was “completely emotionally and physically exhausted. After all, she is still a child. She cried a lot.”