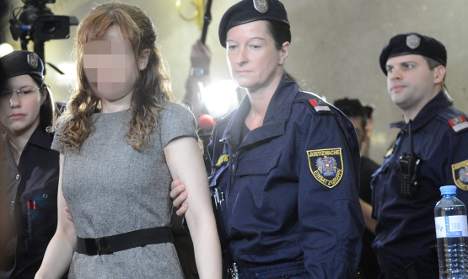 The 34-year-old woman named only as Estibaliz C. pleaded guilty to the killings at the opening of her trial in a Vienna court, which was packed with spectators.

She described Estibaliz C. as an “ice-cold, highly dangerous woman,” calling her a “ticking time bomb”.

But defence lawyer Rudolf Mayer countered those claims, saying his client was a “deeply disturbed person who had not chosen to be disturbed.”

He also said that the first victim, the defendant’s German husband, was a “mean” man, citing comments from his previous partner, a policewoman who said she once locked herself in a room out of fear of him.

Die Presse reported that the defendant, who has dual Spanish-Mexican citizenship, met her husband in Germany. The two of them later moved to Vienna to open up an ice cream parlour.

But Estibaliz C. said her husband Holger H. changed considerably after their marriage, claiming he became both physically and verbally abusive, and did not help to resolve the pair’s financial troubles.

“Everything I fought for, he tried to sabotage,” the paper quoted her as saying. “And I was helpless.”

Estibaliz C. said her husband had agreed to leave – but in April 2008, he changed his mind and refused. The defendant claimed she shot him with a pistol, though she could not remember how many times.

She cried as she explained that she only chopped up his body with a chainsaw once it had started to decompose – and temporarily put the pieces in a freezer before taking them to the cellar and encasing them in concrete.

Estibaliz C. reportedly told the court that her father had made things tough for her growing up – adding that she always had problematic relationships with men.

Within two years of her husband’s demise, she had a new boyfriend, but was unhappy with him, describing their relationship as like “having a plastic bag over one’s head.”

When she accused him of flirting with another woman, Manfred H. reportedly started yelling and then went to bed.

“He turned toward the wall and started snoring,” Die Presse quoted her as saying. “He just turned around and considered it done. I was so angry. I had the pistol under the mattress. I took it out, reloaded it and shot.”

She also dismembered his body – and put the pieces into tubs before getting her unwitting brother who was visiting from Spain, to help her concrete them into the cellar of the ice cream salon.

Handymen stumbled upon parts of the victims’ corpses in June of 2011. Estibaliz C. fled, but was apprehended in Italy a few days later. A verdict in the case is expected later this week.