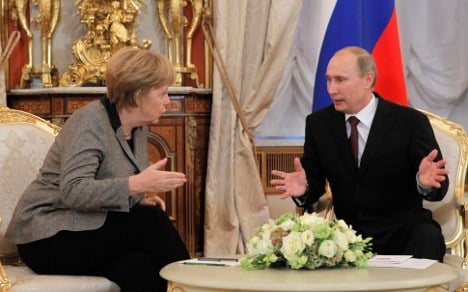 Merkel said the band’s protest – singing anti-government songs in one of Moscow’s main orthodox cathedrals – would spark “discussion” in Germany, but said, “In Germany you wouldn’t then end up in a penal camp for two years.”

Ahead of what might turn out to be an uncomfortable supper, Merkel also even appeared to offer Putin leadership advice of a more personal nature. She underlined the importance of getting used to dealing with criticism. “If I always got sulky straight away, then I wouldn’t manage three days as Chancellor,” she told him.

But Putin defended his actions, claiming the Pussy Riot group had exhibited anti-Semitic behaviour, which could not be tolerated – although this has not been substantiated by other sources.

Merkel said that a healthy relationship required constructive criticism, and that the two countries’ friendship “won’t be improved by brushing all this under the carpet and not discussing it”.

Putin also claimed that he wanted “open discussion” despite “differences of opinion” between the two powers.

The meeting was Merkel’s first visit to Russia since the beginning of Putin’s controversial second term as President in May.

A resolution passed by the Bundestag on November 9 commissioned the Chancellor to raise concerns about the state of human rights at the conference. The report drew attention to what it termed “repressive tendencies” within the political system.

“Legal and judicial measures have been taken which in their totality aim at achieving a growing control over active citizens, and at the increasing criminalisation of critical engagement,” it stated.

Others had sought to downplay German criticism of Putin in the run-up to the meeting. Foreign Minister Guido Westerwelle warned of the danger of “over-doing” criticism, emphasising that Germany and Russia still had many common interests. He argued that an excessively hostile stance from Germany could undermine co-operation.

But it seems that such fears were unfounded. Despite Merkel’s unprecedented candid statements at the meeting, key deals were also signed by the accompanying delegation representing German business interests.

Siemens, the German engineering and electronics giant, reportedly signed a €2.5 billion deal with the Russian state railway RZD for the delivery of 695 electric locomotives. These will be built together with a Russian partner firm Sinara on location in Russia.

And there were also some reconciliatory moves on a political level: a new visa system is planned to encourage exchange between young people from both countries.