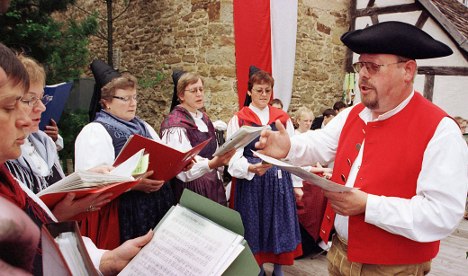 Reports have emerged that Max and Maria Wutz, who founded the Bavarian “Day of Volksmusik” and whose money continues to fund the prize, were lifelong supporters of Adolf Hitler and dedicated Nazis.

On Monday, the Hanns-Seidel Foundation, which has close links to the Bavarian ruling Christian Social Union, told the Münchener Merkur newspaper it would suspend the prize until light had been shed light on the murky pasts of the event’s patrons.

“Until the assessment has been presented no further prizes will be awarded,” a spokesman for the foundation told the paper.

The “Day of Volksmusik“, held each year at the foundation headquarters in Wildbad Kreuth on the German-Austrian border, awards prizes to musicians and groups deemed to have made a special contribution to Bavarian folk music.

But Der Spiegel magazine claimed on Monday that the event was still being financed with money left to the foundation by the Wutz couple, dedicated Nazis from Berg in Upper Bavaria.

Max Wutz was a lifelong servant of the Nazi party from its very beginnings in the early 1920s, the magazine reported.

His wife Maria was equally dedicated and reportedly once said it was the “presumptuous cheek of the Jews” that had prompted her to join Hitler’s party.

After the couple died, an “Order of Blood” medal was found in their villa – it was only given to those who had been involved in Hitler’s Munich putsch of 1923 where he tried and failed to instigate a revolution. It resulted in the jail term during which he wrote Mein Kampf.

Maria, a trained singer, even performed Wagner’s Lohengrin for Hitler in 1933 on the tenth anniversary of the failed take-over, the magazine said.

When she died in 1983, she left the childless couple’s entire fortune and estate to the Hanns-Seidel Foundation, a political education institute founded in the 1960s “in the service of democracy, peace and development,” according to their website.

On taking possession of the couple’s villa on the shores of Starnberg Lake, foundation employees disposed of the Nazi medals, weapons and memorabilia stored there, and promptly sold the property, Der Spiegel said.

The Hanns-Seidel Foundation then obeyed the Wutz couple’s dying wish that their fortune be used to establish a celebration of folk music, with the first event held in 1984.

Despite the clear evidence in the couple’s villa, the Hanns-Seidel Foundation told the magazine they had only been aware of the Wutz couple’s murky past since 2010, after which their names were deleted from public announcements about the music event.

But the foundation never made any public announcements distancing it from the Nazi couple, or even issued any internal communication on the matter.

Bavarian state premier Horst Seehofer of the CSU and the party’s honorary chairman Edmund Stoiber are both members of the foundation’s extended board.

Both politicians expressed surprise about the direct funding links to some of Hitler’s earliest and staunchest supporters, telling Der Spiegel they had been given no information about the Wutz couple by the foundation.