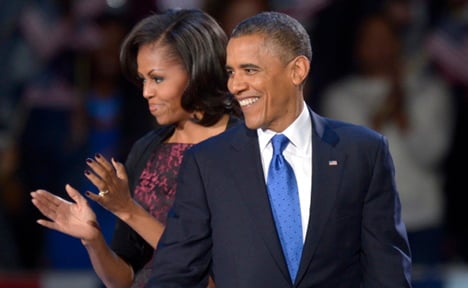 After a long, tense night in which both Americans and Germans were glued to their televisions, politicians lined up to offer their support on Wednesday morning. Merkel quickly put out a statement inviting Obama to Germany.

“It would be my pleasure to welcome you, as my guest, to Germany once more,” she said, after hailing his re-election. Particular hot-topics for the two countries over the next four years would be the world economy, Iran’s nuclear programme and their engagement in Afghanistan.

“I have deeply appreciated our many meetings and conversations about all the issues involved in developing the German-American and the transatlantic relationship, not least in overcoming the global financial and economic crisis,” she wrote in a letter released by her office.

She also cited their cooperation on Afghanistan, where Germany has the third largest military contingent after the United States and Britain, and efforts to convince Iran to abandon sensitive nuclear work.

“I look forward to continuing all this cooperation so both our countries can continue to stand side-by-side to contend with the important foreign policy and economic challenges that we face as friends and allies,” she wrote.

“I wish you continued strength and success in the second term before you.”

Merkel, a conservative who faces an election next year, has placed a priority on transatlantic ties during her two terms but frequently clashed with Obama and his team on the right response to the European debt crisis.

While Merkel has argued that debt reduction was crucial to make economic growth sustainable, Obama has said that excessive austerity could snuff out any recovery and threaten the global economy.

President Joachim Gauck said in a statement that “I, and my country’s people, offer you [Obama] our heartfelt congratulations.”

As equal partners, Germans the US both have a global responsibility, he said. Adding, “We are called upon to take on worldwide challenged and threats to freedom, peace, well-being and our environment.”

Foreign Minister Guido Westerwelle said he hoped the re-election would give German-US relations a new burst of energy, in order to strengthen global safety.

He also called for more free trade between American and Europe, saying that it was “a central European objective.” Discussions would have to begin as soon as possible, so that no more time would be lost in securing the already unstable world economy.

Bundestag Chairman of the Social Democratic Party (SPD) Frank-Walter Steinmeier also congratulated Obama. “We need now to invest more in working together across the Atlantic,” he told national broadcaster ARD, adding that he believed the world’s expectations of Germany were going to increase.

Others took to social network Twitter to offer their well-wishes. “I congratulate Barack Obama,” said Co-Chairman of the left-wing Linke party Bernd Riexinger. “I hope he looks after jobs, the American infrastructure and promotes fewer wars.”

Karsten Voigt, former head of German american relations and SPD politician told the Kölner Stadt Anzeiger that, “it’s easy to see that the Republican party in the last few years have gone more towards the right, Americans have become more ideological and Obama is looking at the world more in an European way.”

Americans across the country gathered to events to watch the election, and celebrations are expected to carry on throughout the day.