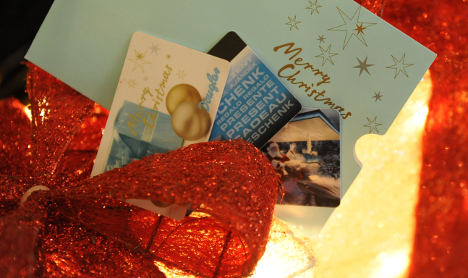 The average budget for Christmas presents is stretching to €230 this year, according to a survey of 2,000 people conducted by consultants Ernst & Young.

This is €17 on average more than what was spent last year – an increase of eight percent. Yet the pre-crisis average budget of €246 that was seen in 2007 still seems a long way away.

Women spend on average €237, while men generally spend €224, the survey said. Regional differences show those living in Hesse are the most generous, with an average gift budget of €254.

Cash and vouchers have taken the top spot in the most popular present ideas for the first time, Ernst & Young said. Around 60 percent of those asked said they were putting such gifts on their list – with an average of €50 per money-related present. That is €10 more than last year.

Books have not given up their place under German Christmas trees this year, despite slipping from first to second place in the survey. Last year, the average German spent €26 on books for Christmas gifts, and this figure has slipped a little to €24.