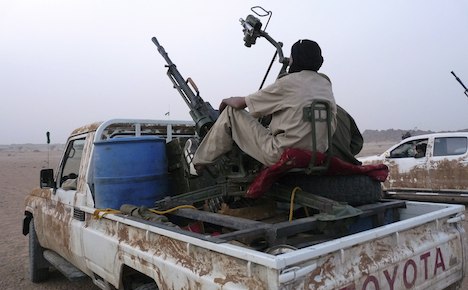 “The stability of Mali is very important to security for us in Europe,” Westerwelle said in brief remarks at the Bamako airport.

He announced that Germany would give one million euros to help support the people in the north of Mali as part of a humanitarian effort.

The north of the west African nation has fallen under the control of armed Islamist groups, some linked to Al-Qaeda, in the wake of a coup attempt in Bamako back in March.

The German top diplomat stressed the need for dialogue among Malians to find a solution to the crisis in the north.

“We want a process that regroups all the parties with a political approach oriented to democracy,” he said.

During his brief visit to the Malian capital, Westerwelle met with the country’s interim President Dioncoundo Traore, and the prime minister and foreign minister of the transitional government.

Mali’s premier Cheik Modibo Diarra said in a statement that “Germany would do all it could to prevent Mali from becoming a sanctuary for international terrorism”.

The statement cited Westerwelle as saying that Germany was “ready to provide financial means to help Mali overcome the challenges that it is facing.”

Westerwelle had said on October 23 that Germany was ready to participate in an international military mission to help the Africans stabilise north Mali.

“The international community must support Mali to take back control of north Mali,” he had said.

On October 12 the UN Security Council adopted a resolution preparing for the deployment of such a force for Mali, giving the regional bloc ECOWAS, or the Economic Community of West African States, 45 days to firm up its plans.