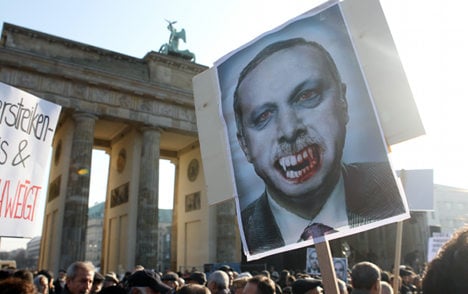 Erdogan, whose visit to Berlin was marred by Kurdish protests, told reporters after talks with Chancellor Angela Merkel that Turkey could not manage the influx on its own.

Around 1,800 people, according to police, demonstrated against Erdogan’s visit in front of the Brandenburg Gate near Merkel’s chancellery, condemning what they called human rights abuses including the jailing of hundreds of Kurdish opponents.

“We absolutely need the support and assistance of Germany,” he said. “At a time when we’re searching for global peace, this is of course a catastrophe and we have to stop it.”

Merkel acknowledged the situation in Syria had become “a real burden” for Turkey and offered “humanitarian aid” to help cope with the tens of thousands fleeing the bloodshed.

“We feel responsible for the security of Turkey,” Merkel said of Germany’s NATO partner. She praised what she called Turkey’s “restraint” in response to Turkish citizens killed by Syrian fire.

Erdogan’s government, a one-time ally of Syrian President Bashar al-Assad, fell out with Damascus after its deadly crackdown on popular dissent that erupted in March last year.

Turkey has since sheltered some 108,000 refugees fleeing the conflict, as well as the exiled Syrian opposition’s military and political leadership.

Ankara accuses the PKK of recruiting and fundraising abroad to wage battle on Turkish soil, and the separatists have ramped up attacks in recent months.

“I underlined once again that it is of great importance to Germany to be helpful everywhere in stopping terrorist activity, also by the PKK,” Merkel said. “We want to step up this cooperation.”

Erdogan sounded a more conciliatory note in Berlin, thanking Germany for its pledge of support in fighting “separatist terror organisations” and calling for “more intensive cooperation” including extraditing criminal suspects.

Erdogan reasserted Turkey’s aim to join the EU, while Merkel acknowledged that her conservative CDU party had agreed to back “open-ended” negotiations between the bloc and Ankara but would prefer a “privileged partnership” with the mostly Muslim country.

“We’ve learned to live with our different positions and nevertheless develop good relations,” Merkel said, insisting that the “EU is an honest negotiating partner”.

Erdogan had said at the start of his visit late Tuesday that the EU must accept Turkey as a member at the latest by 2023, the 100th anniversary of the founding of the republic, “or lose Turkey” entirely.

Merkel noted that Turkey had seen its economy expand at an impressive clip, with 3.2-percent growth forecast this year. “We would wish for similar development in the EU,” she said.

Germany and Turkey are linked by the around three million people of Turkish origin living here, most of them descendants of “guest workers” who arrived under a programme launched in the 1960s.