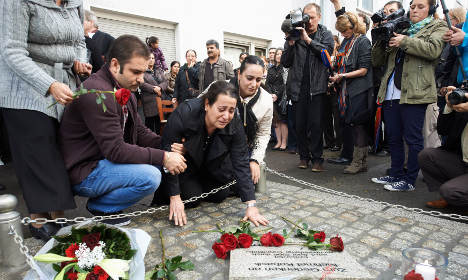 A Federal Office of Justice (BfJ) report, dated August and seen by the Neue Osnabrücker Zeitung newspaper, said a total of €832,407.67 was in the process of being paid to the families of the victims, and that the compensation had been agreed by the Justice Ministry.

The spouses and children of the ten people murdered by the National Socialist Underground (NSU) gang are set to receive €10,000 each, while siblings will get €5,000 and funeral costs will be reimbursed to the families.

Around €140,000 has already been paid to victims of a nail bombing carried out in Cologne in 2004, where 22 people were injured, the report said.

The compensation structure was based on guidelines set out in 2009, which determines how much is paid to victims of far-right extremism.

In the document, BfJ President Heinz-Josef Friehe wrote that the decisions had been made in view of the “particularly severity of the damage done or to alleviate any shortfall in income that may have occurred.”

The NSU spent a decade carrying out the killings, bombings and bank robberies before finally being tracked down in November last year. The trio murdered nine small-business owners of immigrant background and a German policewoman between 2000 and 2007.

They were stopped when two of them – Uwe Mundlos and Uwe Böhnhardt – were cornered by police after a botched bank raid. Mundlos shot Böhnhardt and then himself in the caravan.

The third member of the group, Beate Zschäpe, gave herself up to police a few days later, but not before she destroyed evidence by setting fire to their shared flat in Zwickau, Saxony.

Zschäpe and at least 11 people thought to have abetted the group over the decade are likely to face charges before the end of the year, Interior Minister Hans-Peter Friedrich said on a TV chat show on Sunday.

Over the past year, a parliamentary committee has uncovered details of the German security forces’ failure to track down the NSU, despite having several informants within the neo-Nazi scene who were close to the trio.

Friedrich defended the security forces against accusations that they had been obstructing the committee’s investigation, and said the “internal operations” of the secret service had to be protected.